Star Wars: Battle of Endor [Updated for DK2 and CV1]

by popular demand (and because it was quick and easy for a change) I built a version for CV1. No other fixes or changes at the moment.

Win64 version compatible with Oculus runtime 0.8.0.0.
Note that lighting has regressed in this version as I'm unable to bake lighting since Unity switched from Beast to Enlighten, so I'm afraid the lighting is pretty stark, and it might not run well on all systems. But I've had so many earnest requests that I feel obligated to release it as is. Sorry I can't do better, but I keep installing Unity's updates and trying again in the hopes that one day I can get the lighting to work again.

* Added detail and textures to the cockpit dashboard
* New radar system. Radar is now forward-facing style. Shows which direction to fly relative to your position and orientation. Enemies that are behind you will clamp to the edge of the radar. Blips get smaller with distance. Still some work to do but much better than the old one.
* speed now affects maneuverability slightly. Faster speed = slower turns, slower speed = faster turns (top speed with s-foils open remains the same as before, but for those complaining of not turning fast enough, slow down a bit). Watch out when closing your s-foils and flooring it though!
* fixed broken objectives
* fixed opening text crawl and transition
* fixed the default quality settings
* edited out the slower bits of the soundtrack which didn't fit with the space battle
* optimized some stuff

New DK2 versions, in 32 and 64-bit flavours, but I warn you, they are pretty buggy at the moment.

I'm very interested to hear how it performs on your systems, so please let me know.

Known bugs:
* Later checkpoints not saving
* Fade-in/out on death not working
* invisible collisions near Death Star docking bays
* occasionally TIEs will disappear in front of you
* and on my system I have pretty bad judder (not framerate-related) when looking around. I also find that the position tracking hiccups quite a bit


Well, despite the extra week of vacation, the clock finally ran out. I would have preferred to polish it a LOT more before shipping it, but I won't have as much time to dedicate to it from here on in. Its going through the approval process on the Oculus Share site, but in the meantime you can access it here... 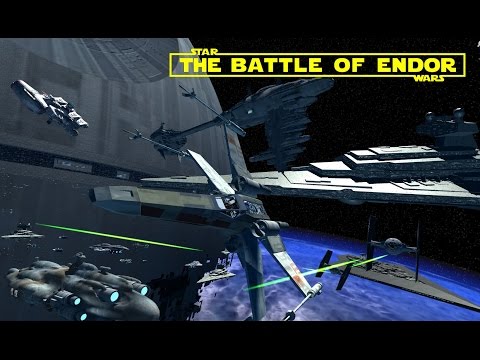 How to play:
Basically, fight off TIE fighters, destroy turrets and shield generators on Star Destroyers, and wait for objectives from Lando. The radar screen is admittedly very rudimentary and not very clear, but you should see yellow dots representing objective locations. When Lando says to engage the Star Destroyers, you need to blow up the 2 shield generators on the Star Destroyer (the one flanked by two rebel ships), after which Admiral Ackbar will tell you the shield is down. Follow the yellow objective point past the Super Star Destroyer (you can take out it's shields and turrets too) to the entrance to the shaft leading to the reactor. Avoid the obstacles, get to the reactor, and blow up the regulator on the right-hand side of the core.

Other notes:
* Your guns will lead and auto-target any TIE fighter inside the green reticle, so just get him in there and hold the trigger.
* The two strings of green lights below the HUD represent hull damage; all red... you're dead.
* The radar screen will flash red and Artoo will trill a proximity warning when you are getting too close to an obstacle.


Known issues:
Jittery image the further you travel from the origin
Last spawnpoint might spawn you inside the Death Star
Occasional sound glitches
The objectives/checkpoint system was very last-minute and is rudimentary. Expect bugs.
No music after reloading checkpoint