we published a 3D recording and playback solution based on the Microsoft Kinect2 and standard video codecs. The software allows you to record 3d clips using the MS Kinect and play them back in Unity. You can find more information as well as a downloadable package of the software which times out in January 2016 at

We believe that our software is different to other solutions as it uses audio/video compression codecs for storing the data (x265HEVC for depth, VP8 for video, and Opus for audio) and thus produces smaller files. Our solution also allows for higher resolution - the 3d meshes are not being rendered through Unity, but by the means of DirectX11 commands, thus bypassing the 65k vertices limit of Unity. As a direct result of this however, you'll need a DirectX11 compatible graphics card to see the recordings. On the other hand however, the recorded video clips (which are standard Matroska files ".mkv") can also be previewed in 2D using a standard media player like VLC. 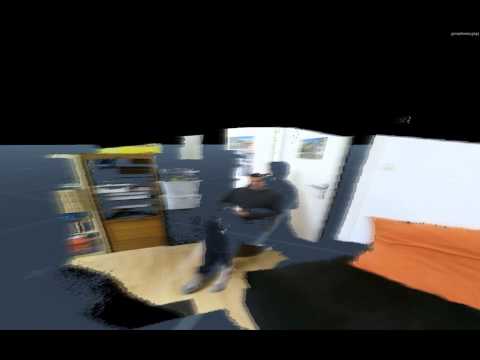 THE SOFTWARE IS ALPHA - THERE ARE STILL BUGS. THIS IS ALSO JUST FOR WIN7 IN 64Bit OR HIGHER, AND YOU MUST HAVE A DIRECTX11 GRAPHICS CARD FOR PLAYBACK! YOU WILL ALSO NEED A MICROSOFT KINECT2 AND WIN8 OR HIGHER FOR RECORDING.

Known issues:
- only the first recording done with the recording app has audio and video in synch
- some cards (like the 1st gen NVidia Titan) crash
- same for older and low-end AMD cards
- point cloud interpolation mode in Unity is broken right now, as the interpolator was rewritten and aligns the points differently in the target buffer as in the color buffer

Please report any issues to [email protected] - Thank you.
0