Volunteer Moderator
January 2017 edited January 2019 in General
Inspired by a post by @YoLolo69, I've created a little tool to make forum use a little nicer, without needing Cyber to hack around in the server code and with us able to customise.

Oculus Forum Tool is a script for either Grease Monkey (Firefox) or Tamper Monkey (Chrome) that adds colour coding to posts on this forum.
https://github.com/rajetic/oculusforumtool

Currently it recognises and colour codes as follows:
Oculus staff - blue.
Volunteer moderators - orange.
Your own posts - cyan.
Banned users - yellow.
Everybody else - normal black.
(Note: the "your own posts" takes precedence, so an oculus staff member will see their own posts in cyan, not staff blue) 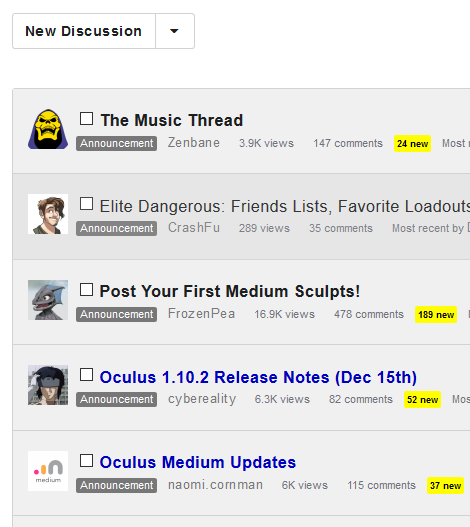 At the moment there's no easy user customisation interface. I may add that, but I really hate javascript programming (but I love the idea of messing with websites to make them behave how I want).
But you can edit the colours used in the script itself, they are all defined near the top.

Another possible enhancement (don't hold your breath) is custom behaviour based on user name. Currently it's all based on class data the forum exposes, I don't need to deal with names. But if I did, it would let you flag specific people you want coloured.


Feel free to read the source before installing. It's pretty small. All it does is look for certain LI or DIV tags and change their style setting on your local system. These scripts can also do some pretty evil things, so it's best to always be wary.

Other browser support? Maybe, if they have some equivalent to greasemonkey. I tried Opera scripting in the past, it annoyed me so I quit.


How to install:
Firefox
- Install Grease Monkey. https://addons.mozilla.org/en-US/firefox/addon/greasemonkey
- You should be able to drag & drop the script file onto Firefox and it will ask to install.
Chrome
- Install Tamper Monkey. https://chrome.google.com/webstore/detail/tampermonkey/dhdgffkkebhmkfjojejmpbldmpobfkfo?hl=en
- This was trickier. It seems TM won't install scripts unless they come from the chrome store or you made them yourself. So I told it to make a new script then copy/pasted the code over the top.