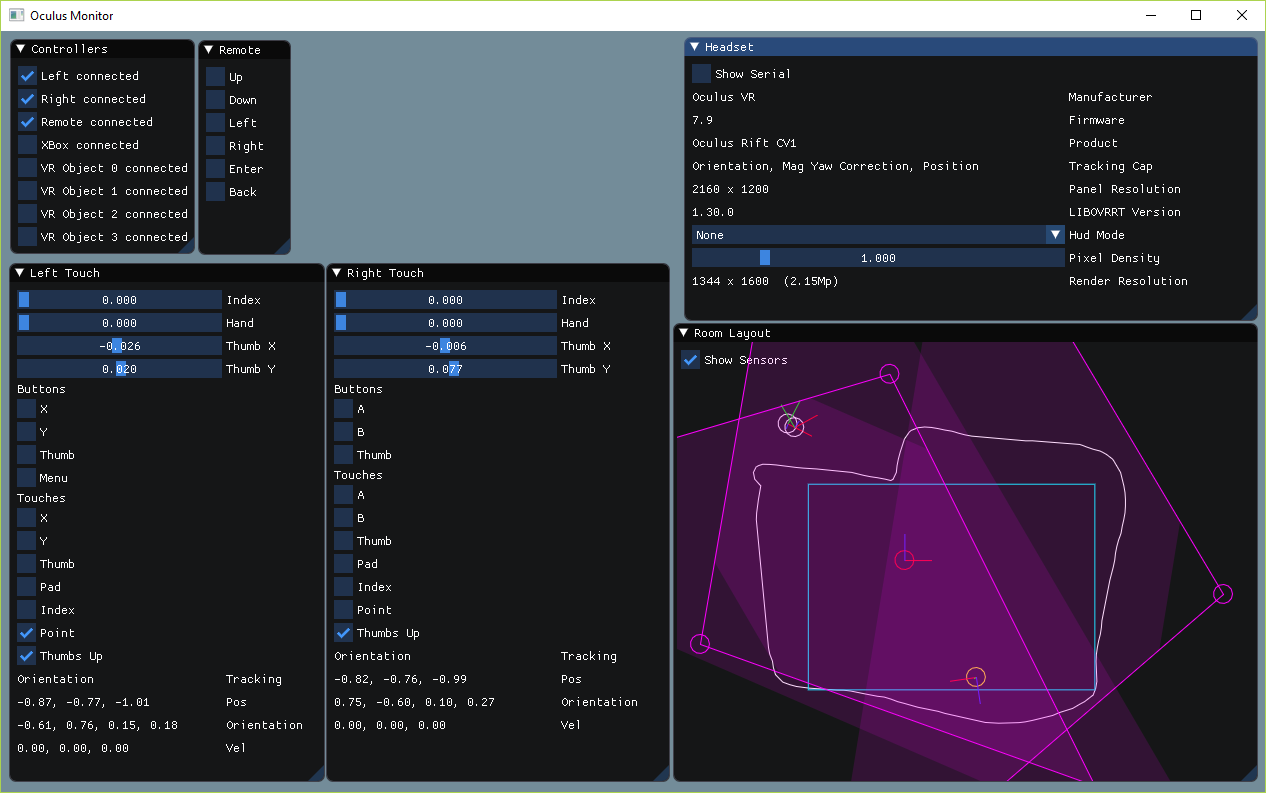 Oculus Monitor shows realtime information about your Oculus setup. Sensors change if you move them, controller tracking is shown if your headset proximity sensor is active, the guardian boundary even updates if you set a new one (in the Oculus app) while Oculus Monitor is running.
(The Show Serial option turns on or off showing the headset serial number. If you want to take a screenshot to post online, it probably is a good idea to not include your serial)
You might notice the left and right touch panels have slightly different data. That's because the oculus button on the right touch can't be accessed by user programs, so I left it out.
Oculus Monitor is using Dear ImGui, with it's default DirectX 11 sample app.
https://github.com/ocornut/imgui

Oculus Monitor is released under the MIT License
https://opensource.org/licenses/MIT

Note: Position tracking of Touch controllers doesn't work unless the headset proximity sensor is active (by wearing the headset, putting an object like a cloth on it, or forced on by the Oculus Debug Tool). The orientation of Touch controllers may also be wrong until they can be calibrated by the headset proximity sensor being active at least once (after that they are tracked with the IMU gyroscopes).

Recording/Replay
A new Playback panel has been added. All major properties (touch tracking and state, headset tracking, sensor poses) can now be recorded and played back. There 6 controls in this panel:
- Record : Start recording the state. Frames are captured based on your monitor framerate. Press record a second time to stop recording. Each time you start recording, it will wipe the previous recording.
- Play : Start replaying the recording. Most panels will show the replay data (not all data is captured per frame, such as headset resolution and serial number, since they don't change at runtime).
- Stop : Stop playing or recording and go back to live mode (live data is displayed).
- Pause : Pause the recording or playback.
- Export CSV : save the tracking data to a CSV file. You can open this in most spreadsheet applications like Excel.
- Export DAE : save the tracking data to a Collada DAE file. You can open this in Blender (and maybe other 3D software).
- Time Slider : This lets you scrub through the timeline.