J0ni1 Posts: 1 NerveGear
November 2018 edited November 2018 in Oculus Rift S and Rift
I just recently upgraded my cpu, motherboard and ram (cpu and motherboard were bought used), and now every time I open Steamvr interface or the Oculus interface, or sometimes when I take off my headset and put it back on, the gpu usage spikes to 100% and the frame rate drops down and the game turns unplayable. It eventually gets back to normal after a while.
PC specs:
Intel i7 6700K 4.2Ghz
Nvidia GeForce GTX 1060 3Gb
ASUS Z170 PRO GAMING
16Gb ddr4 3000mhz ram

And this happens every time the frame rate drops 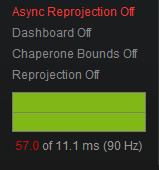 Edit: Noticed on afterburner that vram usage was almost at max and bus usage went up when frame rate dropped. So seems like I don't have quite enough memory.
Tagged:
1
Sign In or Register to comment.
Community Expand for more options.