Volunteer Moderator
April 2019 edited April 2019 in Off-Topic
Here's a mostly working version of a dark mode for this forum.
It features the following:
- generally dark theme for everything
- posts by moderators are coloured orange
- posts by oculus staff are coloured blue
- avatars have been enlarged from 40x40 to 60x60
- emojis in posts are half size
- quotes are coloured a dark cyan, increasing in brightness as they are stacked (quoted quotes, etc)
- code blocks are a greeny colour
- spoilers are a red-ish purple
- in the edit box for a new post, you can now see where quotes are (previously they were invisible)
- signatures are darkened so they don't look like normal post text
- like, lol and awesome counts are yellow
- the flag post button is red
- announcement posts in the thread list page are coloured a dark greenish cyan
There are a few broken bits at the moment. The oculus forum does some tricky stuff, some of its combo boxes use css that is injected after the page is loaded, which I can't override. So for example I currently can't change the community combo box correctly (the one where you pick community / developer / vip / foreign language boards).
I also can't currently correctly colour the OculusSupport account's first post in a thread, for some reason that one account is an admin but isn't given admin css. I can detect it in some situations, but not all (css is rather limited).
There's also a bunch I probably haven't noticed is missing. It's a work in progress.

First install Stylus or similar (Stylish probably works too). You can get it from here:
Firefox - https://addons.mozilla.org/en-US/firefox/addon/styl-us/
Chrome - https://chrome.google.com/webstore/detail/stylus/clngdbkpkpeebahjckkjfobafhncgmne
Opera - https://addons.opera.com/en-gb/extensions/details/stylus/
Next, open the following link: https://raw.githubusercontent.com/rajetic/oculusforumtool/master/Oculus_Forum_Dark_Mode.user.css
Stylus will detect the script and ask you if you want to install. In theory (not tested) it should by default auto update if I make changes. Done.
The repo is here if you want to check for changes manually, It's in my previous grease monkey repo: https://github.com/rajetic/oculusforumtool
Apparently I may be able to add configuration variables for easy customising of colour and turning features on/off. I'll look into that later.
Here's an example: 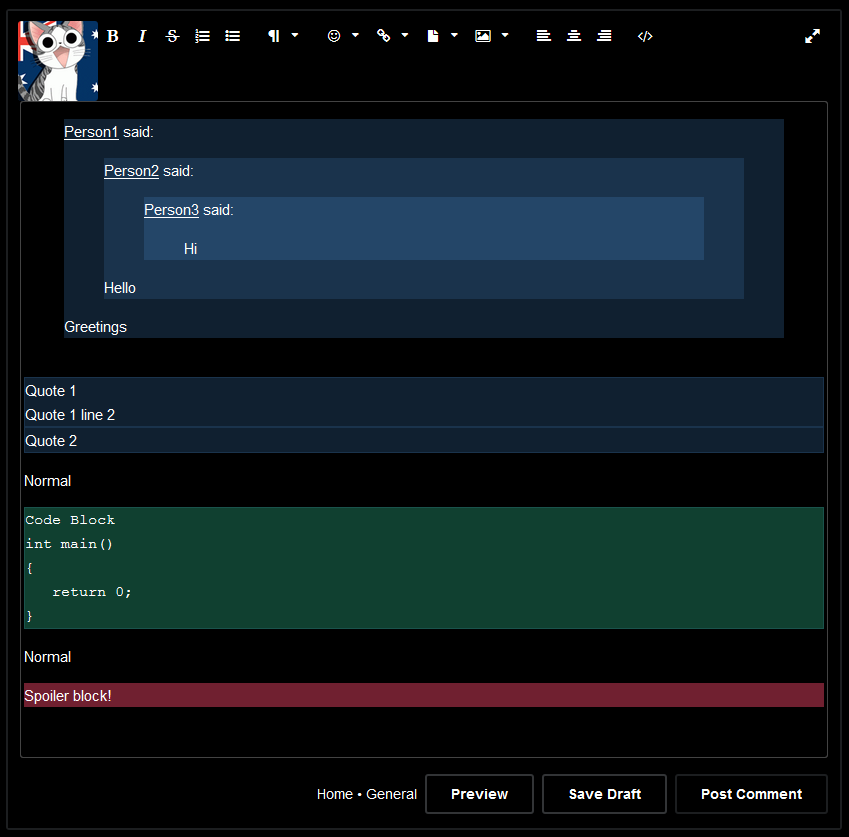