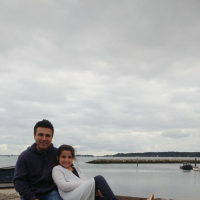 XVinoRossoX Posts: 71 Hiro Protagonist
May 2019 in Oculus Quest
Are we looking at a possible earlier shipment?
0