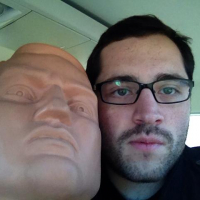 TryHardoGarcia Posts: 3 NerveGear
May 2019 in Support
Unfortunately, I can't afford a new Rift, nor a refurbished one at the moment.

My Rift's microphone is muffled, and I was told that I would have to buy a refurbished unit since my Rift is out of warranty. This is a common issue with the Rift, and I have proof that it was already muffled way before my warranty expired. But still, I was told to buy another one.

Today my right headphone stopped working, and turns out that the issue is the flex cable inside of the Rift's headband, and not the headphone itself. This is also a common issue with the Rift. I can make the sound work for a few seconds if I move the right side of the strap forward and backwards but it stops working always. I tried putting the right headphone on the left plug, and it worked, which is how I know that the issue is the flex cable inside.

Oculus doesn't sell internal parts, nor do they offer repair services. This is not the case for game consoles, PCs, phones, and other electronics that are pricey. I know that the sale volume of Rifts is low, but the goal is mass adoption. It would go a long way, if people saw that Oculus HMDs became useless right after the warranty expired.
Tagged:
0