Knutsi Posts: 147 Art3mis
May 2019 edited June 2019 in Support
Update June 26th: I replied yesterday that I believed their last request was illegal in the EU/EAA (*) and they finally came around and told me that after a review of the case they would not send me a new headset. I got a tracking number today. UPS can still not see the package, but I choose to believe this is the end of this story. I will not post further updates unless this derails yet again.

* You can read up on your rights here. I consulted a few people around me as well, who agreed this case was very bad. I have sent a request to a national consumer rights authority, but will cancel this if everything works out now.

Update June 25th:  Oculus informed me today that "it looks like we were unable to replace just the headset at this time, and must replace the full kit instead". They now want all the items back despite explicitly saying otherwise initially. I will have to pay for the shipment myself, and the address is provided. The rep. is also saying there might be promotion credits as a thank you for my patients. Before I comply with this I need to check with my EU/EAA consumer rights organisations if they are allowed to do this. I believe they need to cover the cost of the returns of a broken product? In any event, this is outrageous, and all the burden in placed on the consumer. I'm five weeks in, and this process is preventing me from buying a new headset + the partial return made it hard to request a refund and close the whole process. This is without doubt the worst online retail experience I've ever had, and I want everyone to know they need to be very cautious ordering directly from this company.

Update June 24th: Oculus has still not sent my replacement. It's been a full month now. In two days it will be five weeks since the broken headset arrived, and I am still not able to use the headset I pre-ordered for release from Oculus.com. All this time they have not been out of stock.

Update June 19th: The replacement for the pre-ordered Rift S headset that arrived broken (worked for 5 minutes) will now take more than a month to arrive to me. The package arrived in their facility before the weekend. Despite assurance the replacement would be sent immediately when they see the package "moving in the system", the replacement has not been sent from them yet. No matter how much problems they've had, 30+ days for them to replace something broken is not nice. (I dont live in a place where shipping takes long either - their facility is reasonably close).

Update June 4th: Oculus Support (@OculusSupport)has still not sent the labels for the return of the broke headset, and their support notified me this night that "it looks like we have encountered a number of issues on the backend which have created some delays with processing replacements". I appreciate that they reached out to me to let me know this (the message was personal, not boilerplate), but the wait keeps adding up. They are basically saying getting a replacement will take a while. Meanwhile, new headets ordered from Oculus.com ship within a day, I've asked if I can just get a refund, and I could just buy a new headset from their site or retail.

Update May 31st 2019: So they did yesterday decide to replace the headset, as expected. The time projection is my new headset will arrive within 10 days of returning the old one. The return label has not yet arrived (it will be from a local partner, I suspect), but I'll keep updating this post with what happens next. I'm happy there is some movement at least.

Update May 30th 2019:  Oculus support has still not committed to taking the headset back or replacing the cable, but said they are looking deeper into the issue at least.. They have once requested I run the log collection again, and sent a general notice they are overloaded. Since the OP was written I have tried the new firmware from the public test channel as well, and asked support if there was any way to hard reset the headset or its firmware/components (there was not). Let me also add that the two machines I tested the headset on have different architectures. One is a MSI VR-ready laptop, and the other a self built tower with a very recent ASUS motherboard targeted at gaming,.

Original post May 24th 2019: Just wanted to share the lack of progress on my apparently broken Rift S after discussing it with Oculus support today. So one important thing is that the headset actually worked for a few minutes when I first set it up, lost hand tracking and never recovered. On the next setup, it got stuck in "sensor check".
After trying everything from reformatting the disk and reinstalling Windows, using a different machine, different USBs 3/2, a powered hub, re-installing software, checking I was not running Windows N, ensuring camera privacy settings were right, restarting the service, and much more I got through to Oculus Support (on Chat) which today suggested:
The headset still does not get past the headset sensor check, and fails with the error in the screenshot. "Skip setup" leads to the headset having sound, but no tracking, and the video being three blinking dots, as seen in the video: https://www.youtube.com/watch?v=tphMVNJFN2E&feature=youtu.be
The rep said the logs did not look like there was faulty hardware, but what else can it be at this point? The USB plug on the PC side of the cable gets very very warm. Maybe it's the cable, who knows. I'm awaiting a reply from them now. 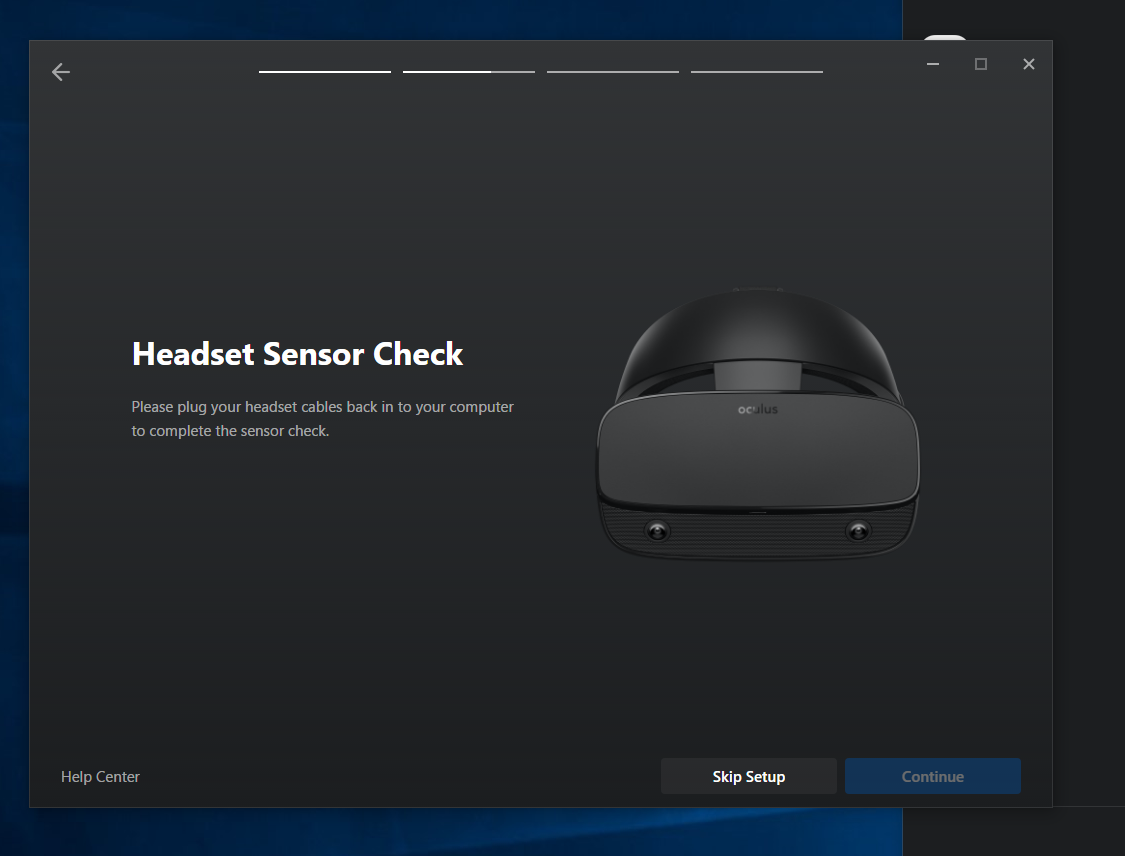 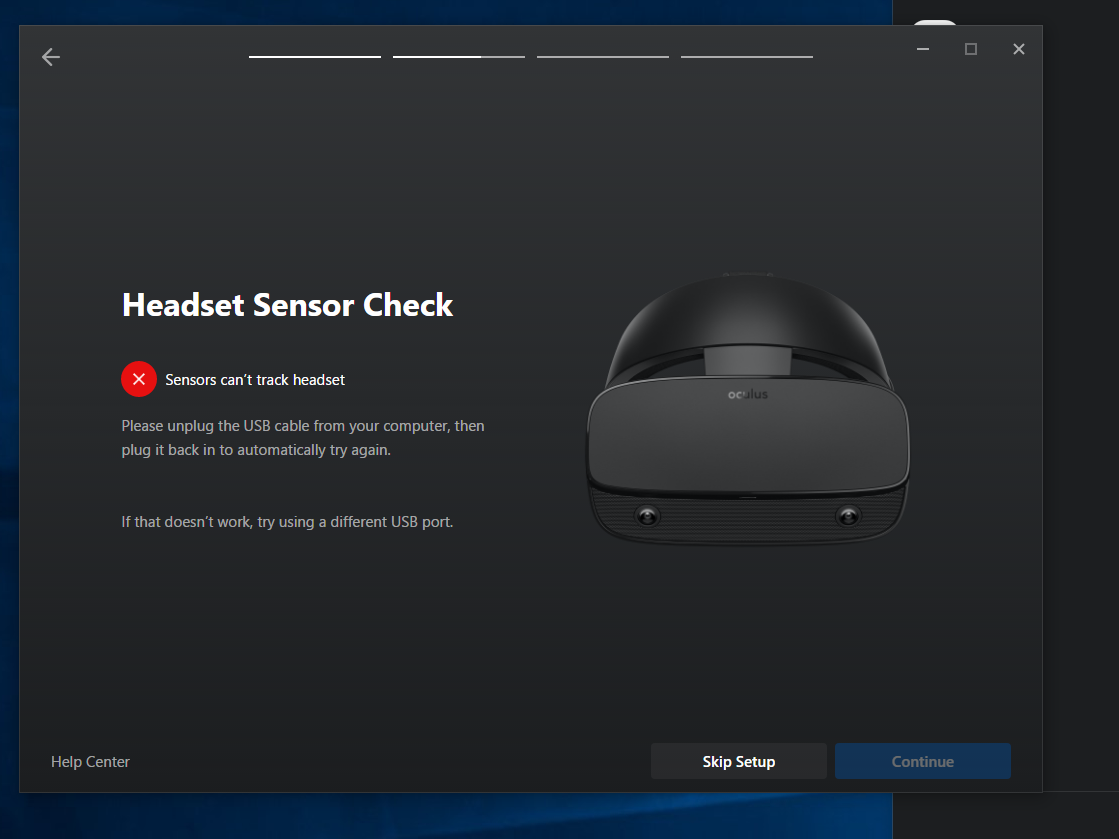 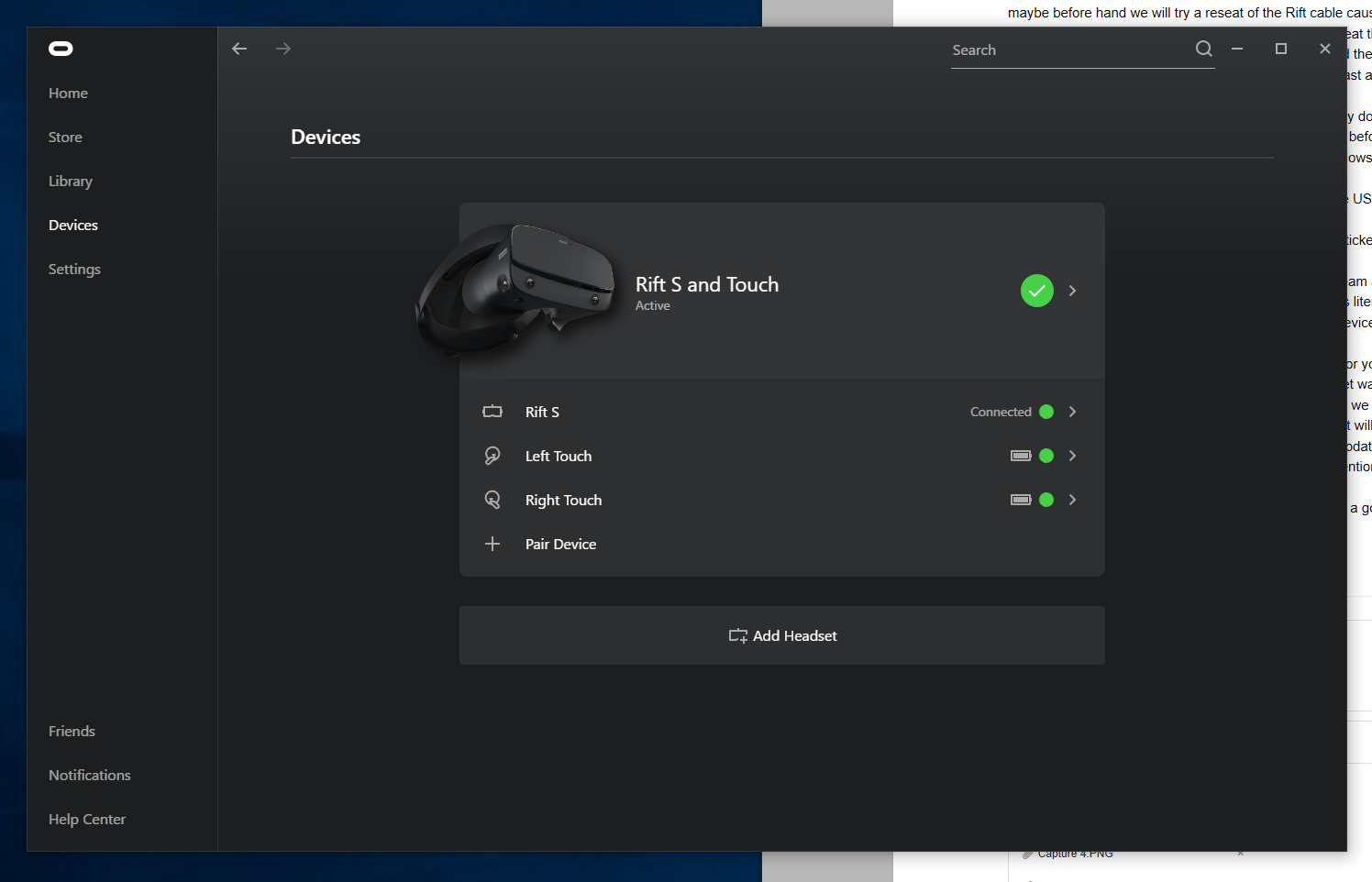