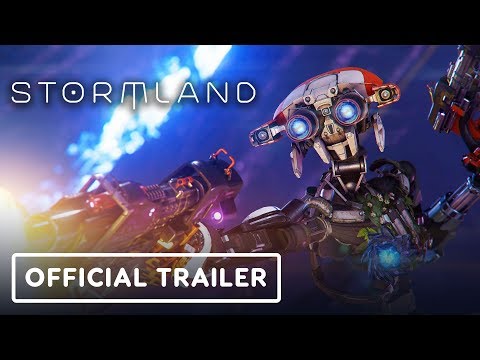 Until otherwise proven, I'll consider Stormland the best VR flagship ever made - even better than Lone Echo and Asgard's Wrath

Gameplay Video Footage will be up at 12PM EST. I'll be adding to this post and replying to any questions to the best of our ability. (Youtube Link Here)

Stormland is a big, created for-VR game that will launch on November 14, 2019.

Created by developer Insomniac Games (https://en.wikipedia.org/wiki/Insomniac_Games) it is their 4th VR game and it shows.

Myself and Show Host Ronnie spent about a week and a half playing the version of the game that was provided to press outlets. Ask US ANYTHING!

You are an Android. You have weapons. You can climb on most anything. You skid along from island to island at high speeds in the large expansive Stormland environment.

This is what should be considered a 2nd gen/wave VR game. Insomniac Games has taken every possible lesson from their previous games and all other proven VR concepts of the last 3+ years in gaming and put it all to use here.

Graphics performance was very good. With an i7 6700k & GTX 1080 on a Rift CV1 we saw a solid 90FPS at the default HIGH settings. Its not liquid smooth as there is a ton on elements on screen at once. The worlds are extremely populated with objects and plant life. The environment is AMAZING!

Sound is also outstanding with a rich and vibrant array of high quality weapon and environment sounds.

Body (android) presence is outstanding and holds up to games like Lone Echo.

This is a Full featured AAA studio Insomniac Games VR game with everything that you would expect on quality.

Controls have every option you could want with forward motion, acceleration, snap &smooth turning, comfort mode, HUD tweaks, left/right hand dominance and seated play options. All baked in from the start.

Ripping apart guns and equipment reminds us of Robo Recall, which is awesome and it feels great.

Climbing in game is freaking awesome and flinging your body upward to gain elevation and a better surprise attack point is equally awesome.

Weapon interactions while it takes a bit to get used to is still quite intuitive. I don’t love dropping a weapon on the ground accidentally in VR games and Stormland makes clever use of the hover where you let go effect, even if only for a moment. You can force grab almost anything and it makes for a solid feeling even during hectic combat sequences. Weapon placement on your body is also a solid A-plus with the game taking care of some of the more annoying aspects of position locking rather making for a close enough is good and snap placement of any weapon you have. Dual wielding is easy, maybe almost to easy in hindsight. There is no reloading mechanic however any picked up weapons can be literally ripped apart by hand and its ammo is automatically distributed to the correct smg/shotgun/sniper rifle etc. The game uses the rip this apart mechanic a lot and its well done. Grenades and health packs are worn on you Android body. You will readily be asked to rip off body parts in order to upgrade them which is a very cool and immersive element to Stormland.

Not a huge con but this is NOT a jump in and play for the 1st time VR game. It has very in-depth movement and gameplay mechanics. That being said for me the combat seemed like I was stuck on a NORMAL or EASY mode. It was not impossible to be killed but only happened to me once in gameplay (that was when I discovered how to activate a grenade on my chest). You may consider this a Pro (as do we). As we understand it the game ramps up difficulty as it goes week by week as the "Cycle" updates to the next. Stealthy game-play is not really rewarded rather a run in and shoot everything utilizing your on arm electrical force shield which can take multiple hits from enemies is more productive.

Weapons dropped on the ground (by you) disappear pretty quickly. More than once a dropped sniper rifle pretty much disappeared almost instantly as we fumbled around to combine/shift our dual smg config to something else. Weapons are hip mounted so each new player MUST calibrate. Good news is that its fast and easy. The game guesses alot on weapon placement and 98% of the time gets it right on what you were intending to do/place.

The story has both light hearted and dark elements as these are sentient androids that you witness being basically slaughtered. Would I let me 6 year old check out the game, probably not. By 10-year-old, sure. Your mileage may very. TBH some parts of the plot seemed innocent (in a good way) while other concepts were dark. I feel the story is excellent but it may not be everyone’s cup of heated robot hydraulic fluid. Again this was a Press Preview who knows what more will be in the release.

Revive did not work out of the box or at all with Stormland. This is expected (based on history) to be fixed by the Revive devs at or right after the launch. Did not get to test Valve Index performance with Stormland.

There has been no real quote from the developer (as yet) on how much playtime is involved. We finished the PREVIEW story mode provided to us in about 4+ hours but this will most likely change for release. We have seen mentions of 6+ hours for the story mode.. There is a continuing cycle change every week so the game post story mode is different with new missions and objectives. The gameplay duration would then entail one’s own interest in the game itself and multiplayer (coop) gameplay. How much playtime is there in a multiplayer game like Onward VR? Great questions as I am at over 80 hours on that game and don’t plan on stopping anytime soon.

edit: Looks like other media outlets are quoting 6+ hours of Story Mode. Waiting for confirmation from Insomniac /Oculus.