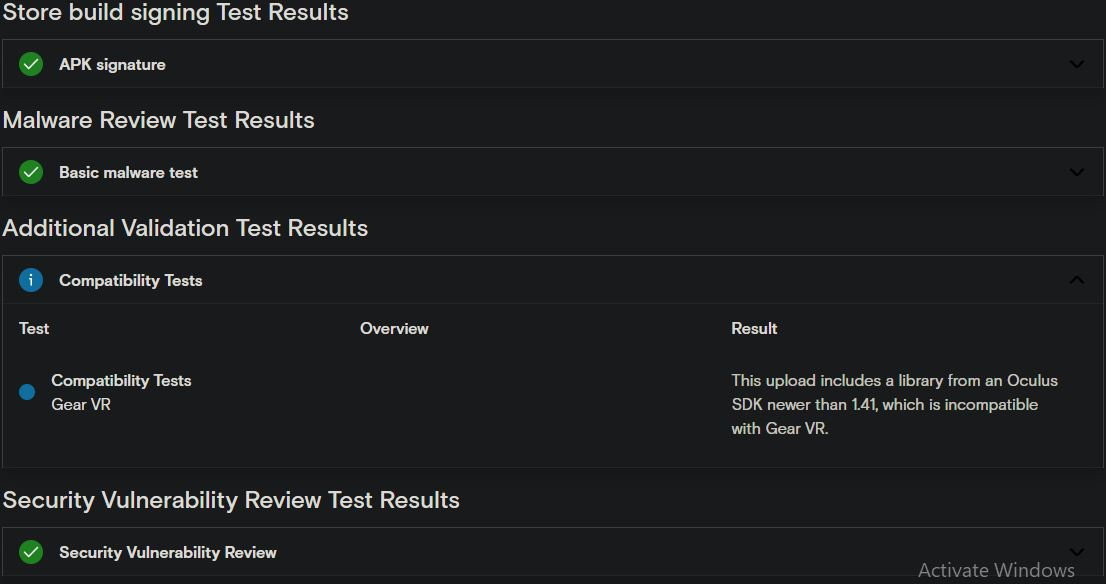 So we haven't been able to install our app which is on the ALPHA Channel. We've recently upgraded Unity from 2018.2 to 2019.2.13f1 and Oculus' SDK tools from 1.32 (All the tools were on 1.32) to Oculus' SDK 1.48 (presumably v 15, we've noticed a fragmented naming convention with this now - but it is Utilities v1.47.0 / OVRPlugin 1.47.0 and SDK 1.48.0). Initially I thought it was perhaps the Oculus servers just not responding or something but we waited over the weekend and it's still an issue. Everything is passing, we can upload builds correctly through the CMD line tool, and even install by side loading the app without any hitches.

However, we're getting the feeling that it's due to the 'Additional Validation Test Results' coming back with that somewhat limited result message: 'This upload includes a library from an Oculus SDK newer than 1.41, which is incompatible with Gear VR.'. Is there something specific that we should be checking off inside of Unity? I can't seem to find anything that is ONLY for GearVR since it's always combined with the Go in most instances.

Attached below is going to be the OculusProjectConfig inside of the Oculus directory within our project:

Here is screenshot of our OVRPlatformToolSettings inside of our Resources directory of our project (outside the scope of the Oculus directory):

Inside of the OculusPlatformSettings we've got everything configured correctly there for the Oculus Rift ID + Oculus Go/Quest or GearVR ID. Should we generate another App ID? We'd rather not have to do this if it's not necessary (which I don't think it is). Otherwise, here is our Android Manifest file. We have generated a new one to test to see if that was the issue - so far it is not. We removed the meta-data android:name="com.samsung.android.vr.application.mode" android:value="vr_only" to see if that was the problem and it still has persisted:

We do have a BETA Channel going with our project before we upgraded Unity + Oculus and we've tried to re-install that to see if it works and it does. Everything is coming down to this upgrade in particular and we would like some guidance on what we're supposed to be removing/checking/etc. within our project to get this to stop referencing anything of the GearVR. We have never built for the GearVR specifically and have no users using that platform to access our app. Any help would be greatly apprecitaed!
Tagged:
0