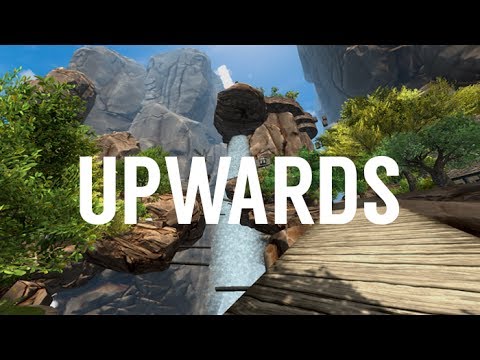 I just started working with Unity and the Rift my last quarter of school, and for my capstone project created a short VR platforming game. The current version of the game, titled Upwards, represents the work that I did over 3 months, with a big thanks to Mixamo Animations, the Unity Asset Store Fantasy Megapack, GameTextures, and Stopsecret’s Peerer’s Edge parkour script (http://forum.unity3d.com/threads/peerers-ledge-parkour-system.237815/). My intention is to remake the game from scratch, possibly in Unreal Engine 4, so that I can work on developing a story, parkour based fighting and puzzles, and higher quality environments.

There are still a few bugs and some areas of the game that aren’t where I’d like them to be yet, but I felt that I should at least release what I’ve done so far before starting over. The primary inspirations for Upwards and this next project that I’m working on come from One Piece, Skies of Arcadia, Final Fantasy CC, and Skyward Sword/Wind Waker (I also used some music from those games). I’m looking to carry over some of the visual style and sense of exploration from those games along with some of the mechanics from games like Mirror’s Edge or Titanfall.

I hope that you can enjoy some of the VR experiments that I tried with Upwards. If you get stuck or encounter a bug, you can access the in-game menu to reset your position as well as fix your orientation if it’s not centered. The game is playable with a keyboard or an xbox controller using TattieBogle. The download links are listed below, and you can find me at http://www.noblewoods.me/ or send me a pm.

I’d appreciate any thoughts or feedback. If you have any cool ideas or encounter issues with the game please let me know so that I can try to include or fix them in the next version. There are a lot of thing that I’d like to do, so I’ll see what’s possible.

For those of you who easily get motion sick, there’s an option to reduce rotation sensitivity in the settings section of the in-game menu. You can adjust that to help reduce motion sickness; if you’re using an xbox controller I’d recommend increasing the sensitivity to 4 or 5. Changing the sensitivity should help a little, but if you're very sensitive to fast motion I'd suggest pacing yourself and taking in the sights versus running around as fast as you can.

Upwards was developed on a Mac, so there might be a few problems with the PC version (I was noticing issues with jumping while holding sprint and mesh flickering in the PC version).

Be sure to check out the game mechanics list in the starting menu area, you’ll want to know that you can double jump, wall jump, and more.