I was watching an episode of Star Trek Voyager the other day and I came across this sequence of Seven of Nine and Janeway playing the game of "Velocity" on the Holodeck : 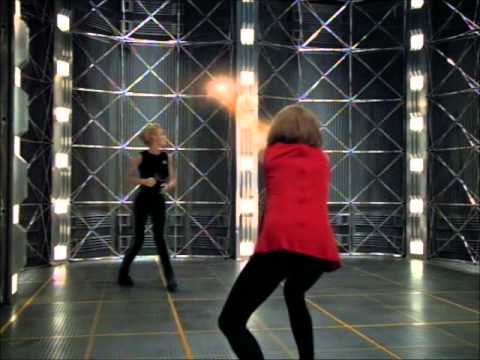 My first reaction was : "Damn ! This would make a cool multiplayer Vive/CV1 game !"
The more I thought about it the cooler the idea seemed to me.

Seriously, 2 players, both wearing an HDM with room scale tracking (or a bit less), playing in a holodeck (awesome mise en abîme), having to avoid the disk while shooting at it with hand inputs !
After a while discussing it, some colleagues and I started working on it on our free time.

Here are the rules from memory alpha :
"Velocity was a one-on-one competitive sport that was a cross between handball and a phaser range and held on a holodeck. Each player must avoid being hit by a disk by shooting it and sending it back toward their opponent. It was fast-paced game of wit and physical endurance, with both players in constant motion, ducking and spinning."

We still have a lot to do.
Lighting and materials are still a work in progress !

What do you think ? Do you like it ?
Do you have any question or suggestion ?

Note : This is a non-commercial demo made for Star Trek fans. The intellectual property depicted herein is not affiliated with or endorsed by the original rights holders.

Ps : (sorry Drash for the copy/paste