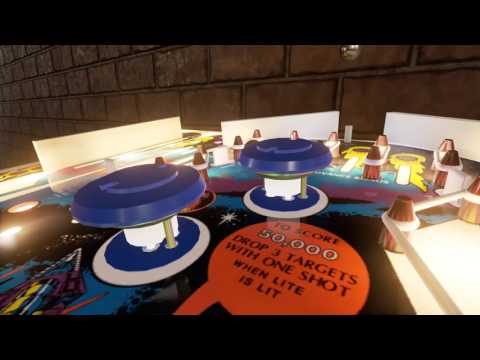 In addition to being a full VR pinball simulator the main focus will be:


* Easy to use editor for creating and sharing virtual pinball machines.
* Plugable API providing complete access to all lights, displays, switches and solenoids for any machine.


The API will enable wiring a pinball machine to scripted game logic, emulators (such as PinMAME), input controllers and rumble devices.

I'm trying to get a few people to try out the demo and gauge how much interest there is.

It's not quite a playable "game" yet but it should give you an idea of how it would play and look in VR. My dev machine has a GTX 760 and runs a solid 75 fps on the DK2. It should be playable on a normal monitor as well.

One thing that could be an issue is limited resolution. However consider CV1 and Vive will have somewhat better resolution than the DK2. I also think there's a lot that can be done with contrast and lighting to improve on that.