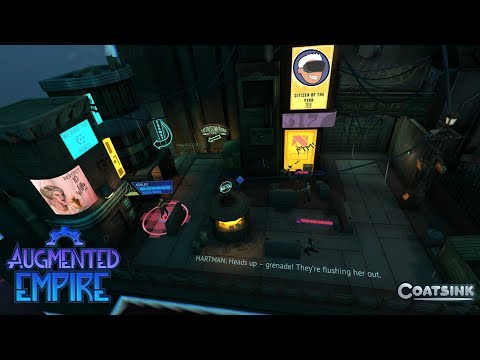 Today on Lunchtime with my Gear VR I am taking a look at Augmented Empire by Coatsink who are the developers behind other great VR titles such as the Esper Series and Gang Beasts. Augmented Empire is a story-driven tactical RPG set on the island of New Savannah, an isolated neo-noir city divided into three tiers by the ‘Citizen Grade System.’ While the citizens deemed of high societal value live in luxury at the summit, outliers and criminals are forced to live in squalor at the island’s depths. From the armchair of their secluded hideout, players use simple look-and-click controls to instruct their team of 6 augmented misfits. This is presented as a world rendered in an ‘augmented reality’ diorama.
Overall I was very impressed with the gameplay style as well as the graphics and sound. The voice acting in Augmented Empire is also especially good as it features the talents of actors such as Kate Mulgrew (Star Trek Voyager), Nick Frost (Shaun of the Dead, Hot Fuzz), Doug Cockle (The Witcher series), and Garrick Hagon (Star Wars: Episode IV - A New Hope, Horizon: Zero Dawn). All I can say is that if you own a Gear VR and miss the days of the classic turn based RPG's then this is one you won't want to miss!
"I have seen the light at the end of the tunnel, and it is the headlamp of the oncoming virtual hype train!"
Tagged:
3