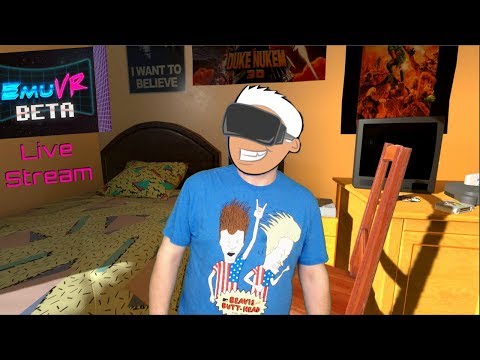 So it seems like I have been waiting for EmuVR to release forever because for several years now the developer has been teasing the VR community with images and short videos on YouTube of the apps progress. Well recently it was finally released into beta and I have to say I absolutely love it!
At the core Emuvr is a very painstakingly detailed VR environment that allows users to play games on many of the old school consoles. The game features extremely detailed versions of the Playstation, N64, SNES and NES systems and all of them worked flawlessly in the last couple of days while playing with this beta. There is also some customization that can be done which allows for the changing of the posters on the walls, bed sheets, pillow and wallpaper in the room as well as playback of videos and music. I have to say... It was awesome to load up old episodes of Battlestar Galactica and Buck Rodgers while siting on the floor of this room watching them on an old 80's style TV again!
Aside from the obvious retro gameplay aspects of this beta, I have to also give mention to just how cool the room you are playing in actual is! The developer definitely poured some love into this creation and it shows in every little minute detail the players can see such as smudges and reflections on the TV screens, as well as a working day night cycle that actually sets to the users system time. All of these little details have actually brought me to moments of presence while hanging out in this room and for me that is a rare gem these days!
There are many other features planned for EmuVR so if you are like me and love the retro stuff or just appreciate nicely detailed environments in VR then I highly suggest going and grabbing a copy of this beta... I can't recommend this one enough! []-)
You can sign up for the beta here:
http://www.emuvr.net/beta
"I have seen the light at the end of the tunnel, and it is the headlamp of the oncoming virtual hype train!"
Tagged:
3