Valuable Player
January 2019 in Games and Apps
I recently completed this Hack n Slash Adventure title. It took roughly 4 hours, and I have to say that it was very enjoyable. For any of you who may be fans of using a "whip" in Virtual Reality, this game should be on your buy-list. Witching Tower reminded me very much - in a good way - of two of my favorite single player VR experiences, Mage's Tale and The Unspoken's Single Player Campaign.
If you'd like to see my reviews on those, check 'em out here:
Unspoken - Single Player
https://forums.oculusvr.com/community/discussion/comment/575657/#Comment_575657

Mage's Tale
https://forums.oculusvr.com/community/discussion/65446/mages-tale-review-spoilers
This review does have some Spoilers. Fair Warning.
Before I get in to all the good stuff about Witching Tower, there are a few things to keep in mind:
Environment
The game world is quite beautiful. It has a nice dark and gothic feel to it; which is fitting since the theme seems to be centered around The Undead. 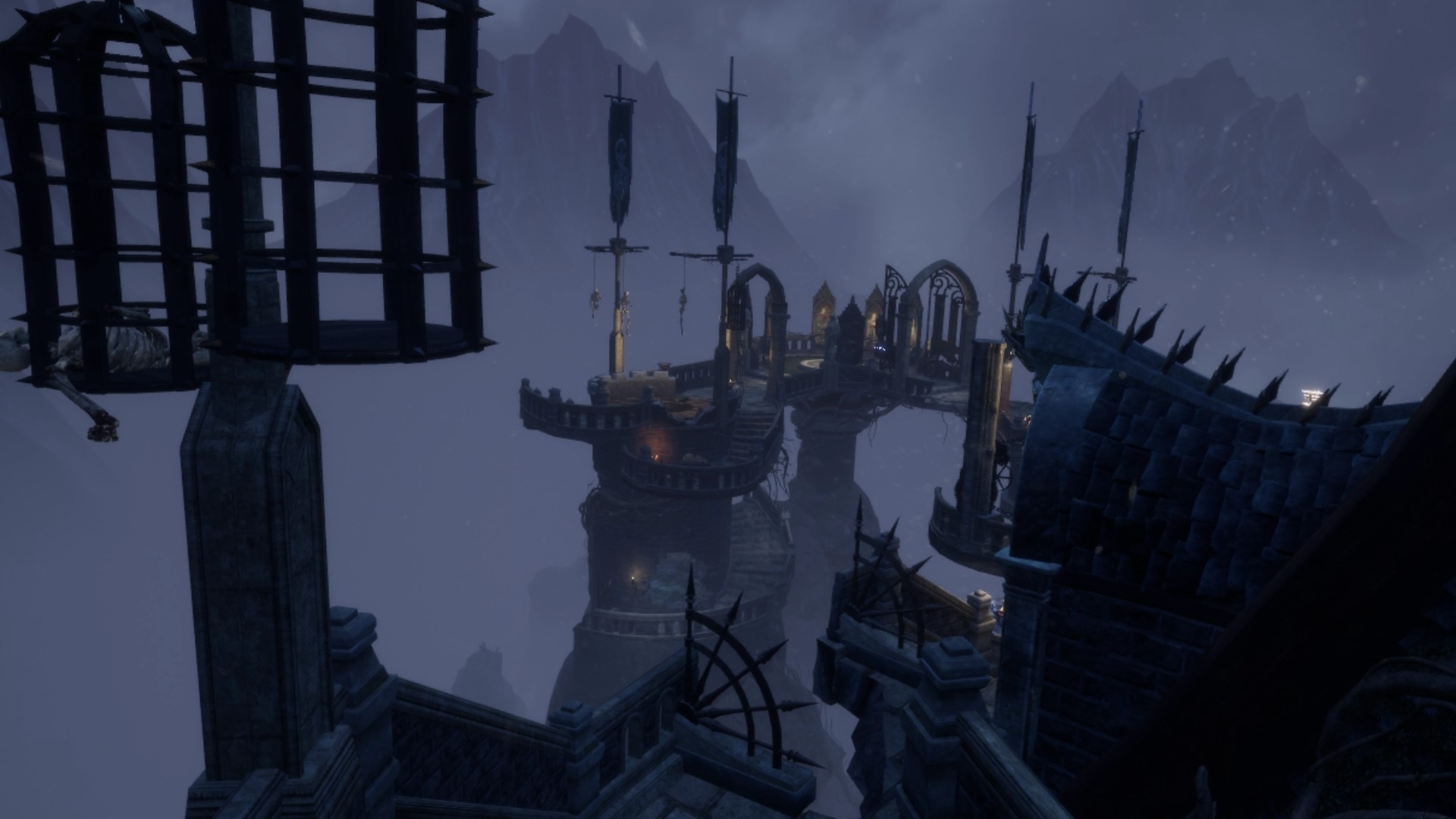 The game will throw some living walls at you that are a fun experience in a VR setting: 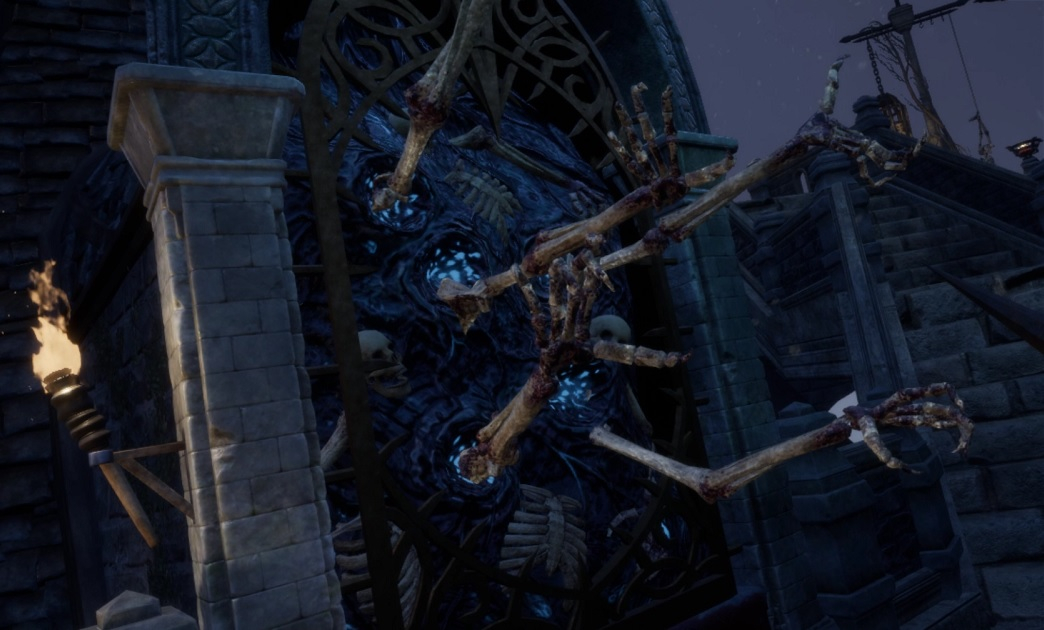 This isn't a "scary" experience despite the dark setting. Instead it feels more like a fun cartoon set somewhere near Hell. It's not unusual to encounter a corpse that was recently tortured: 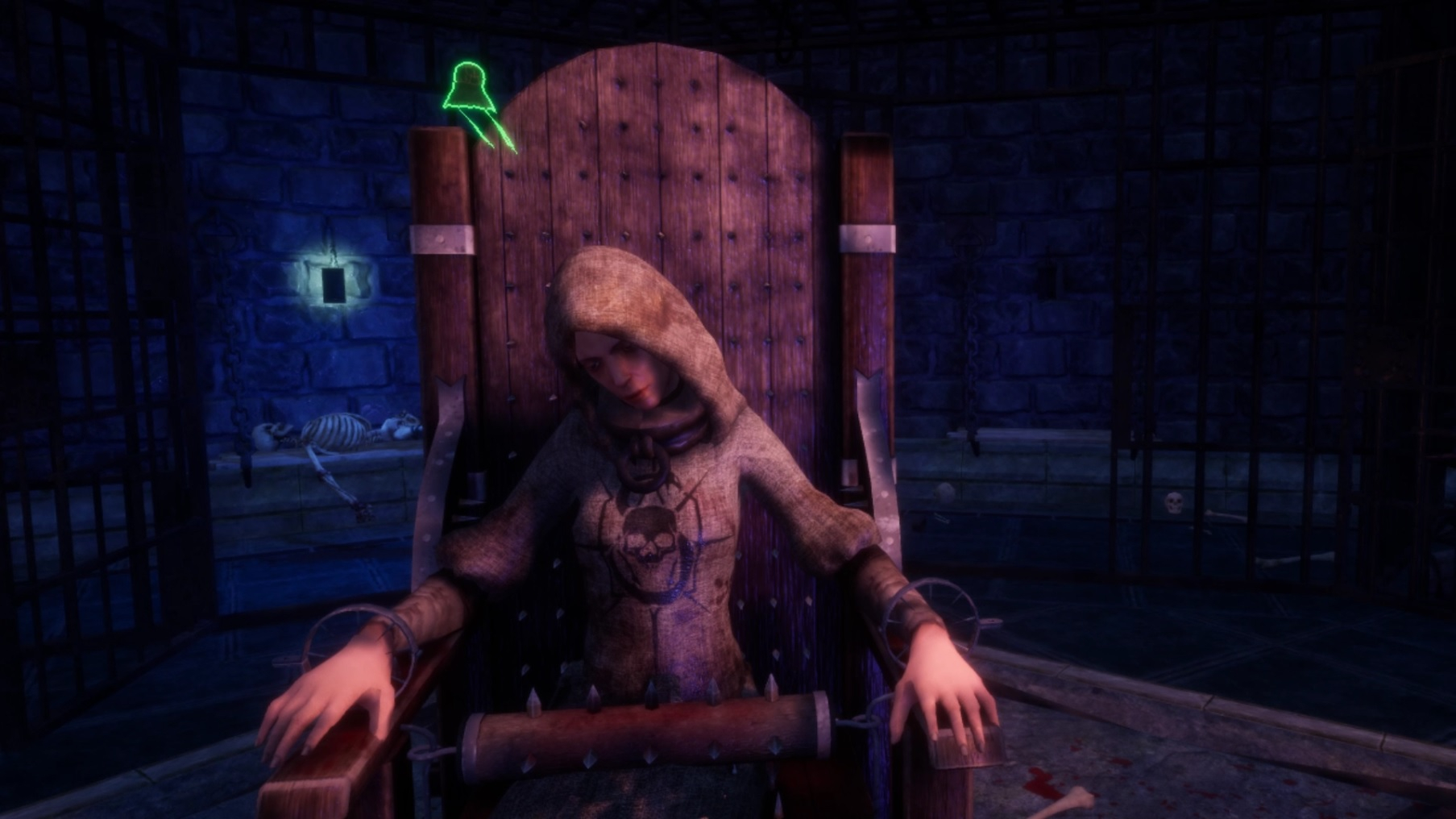 ... or encounter a fun assortment of character engaging in their own dialogue and schemes. 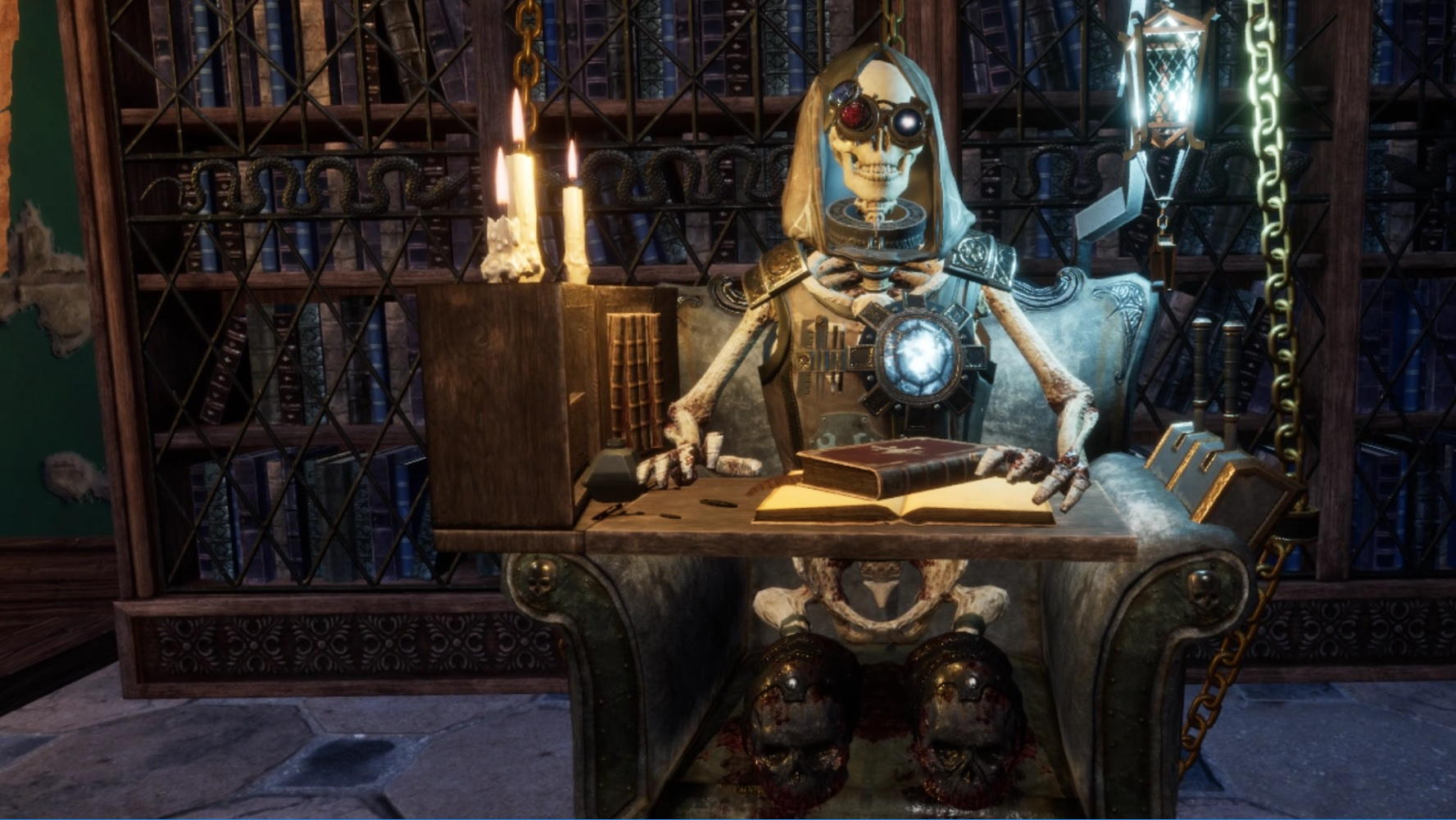 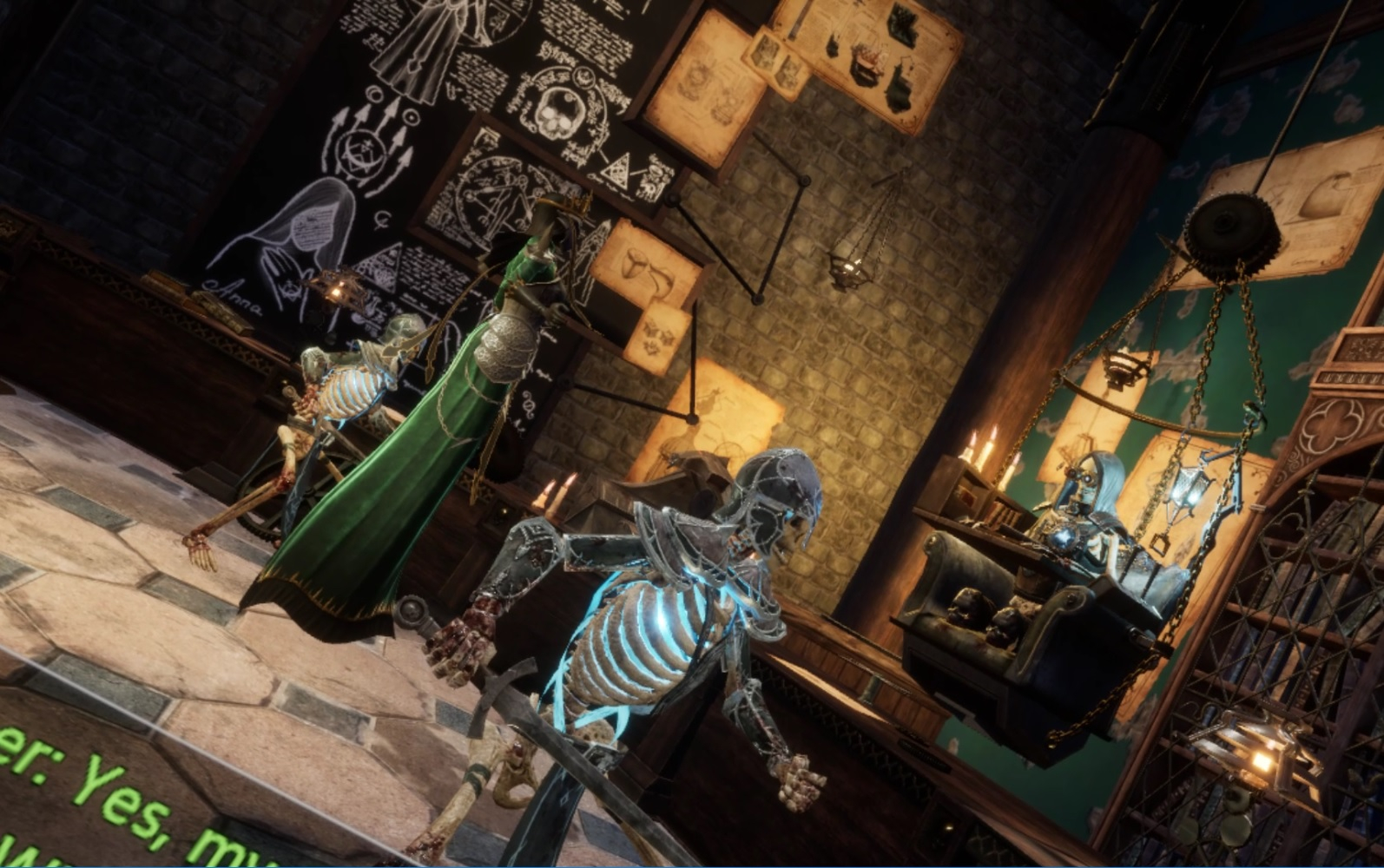 Storyline
You are a female mage who has been trapped by an evil witch. Your goal is to escape and confront her in her Tower. You have help from a companion who will very much remind you of the Goblin who accompanies you in the Mage's Tale. So you will never be too lost as to where to go or what to do next. Along the way you will encounter a small variety of weapons that you can use to fight against the Undead enemies along your journey. At some point you even gain your magical abilities back, which allows you to take control of some Undead creatures. This was a welcome surprise to the story that I was not expecting. And it made for some interesting sequences considering that this game is both a Hack n Slash experience with a strong Puzzle Solving element. You can control a Skeleton (for example) to fight another enemy or to help you solve a puzzle!
Combat
The combat is fairly decent, but when it comes to melee it can be rather easy. I find that "wiggling my wrists" is an effective strategy to dismantle enemies quickly. However, even the coveted AAA Experience, SkyrimVR, has this problem! So I won't hold it against Witching Tower.
The combat itself is essentially limited to melee weapons and a bow (although the occasional grenade is a nice touch): 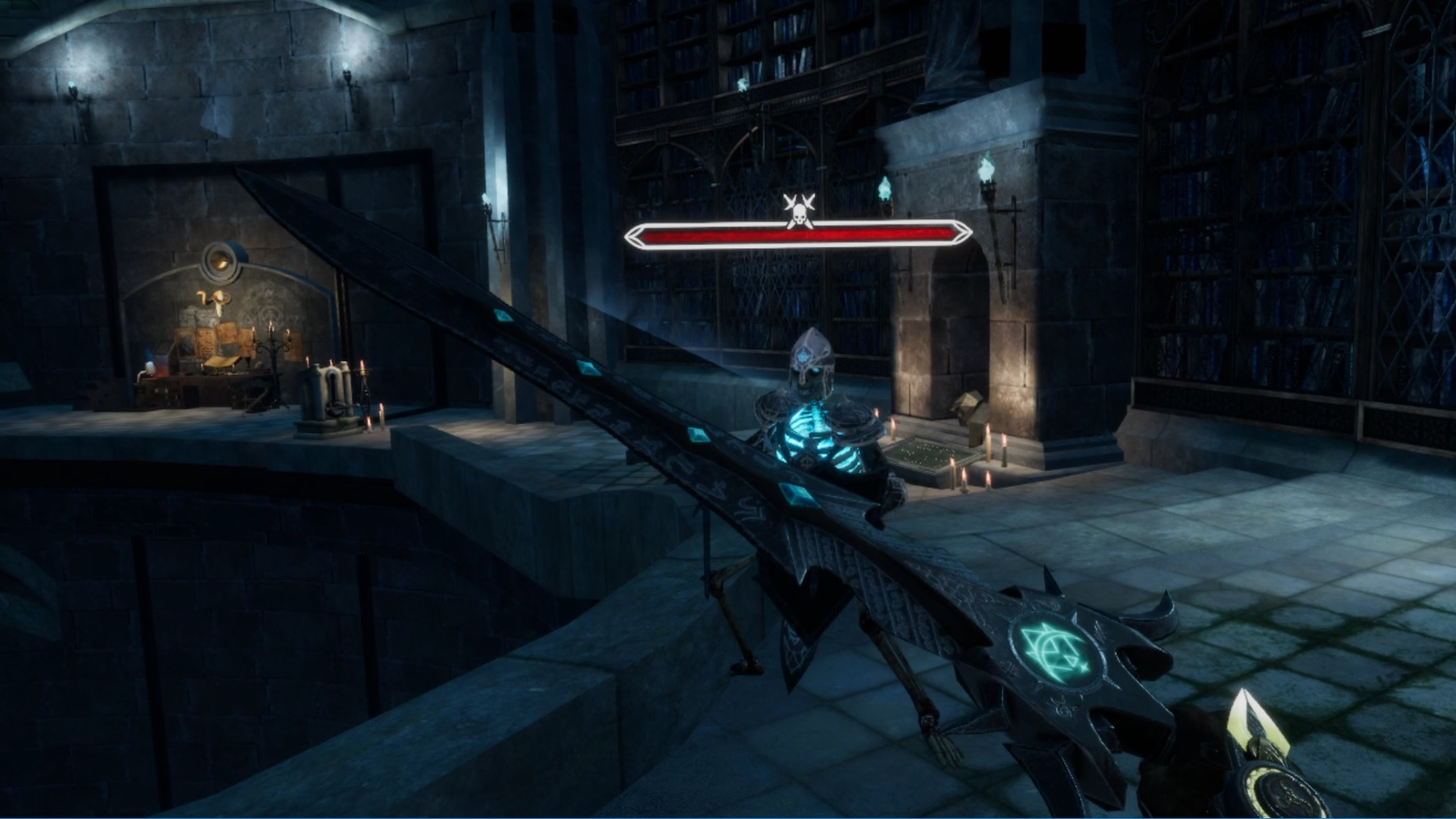 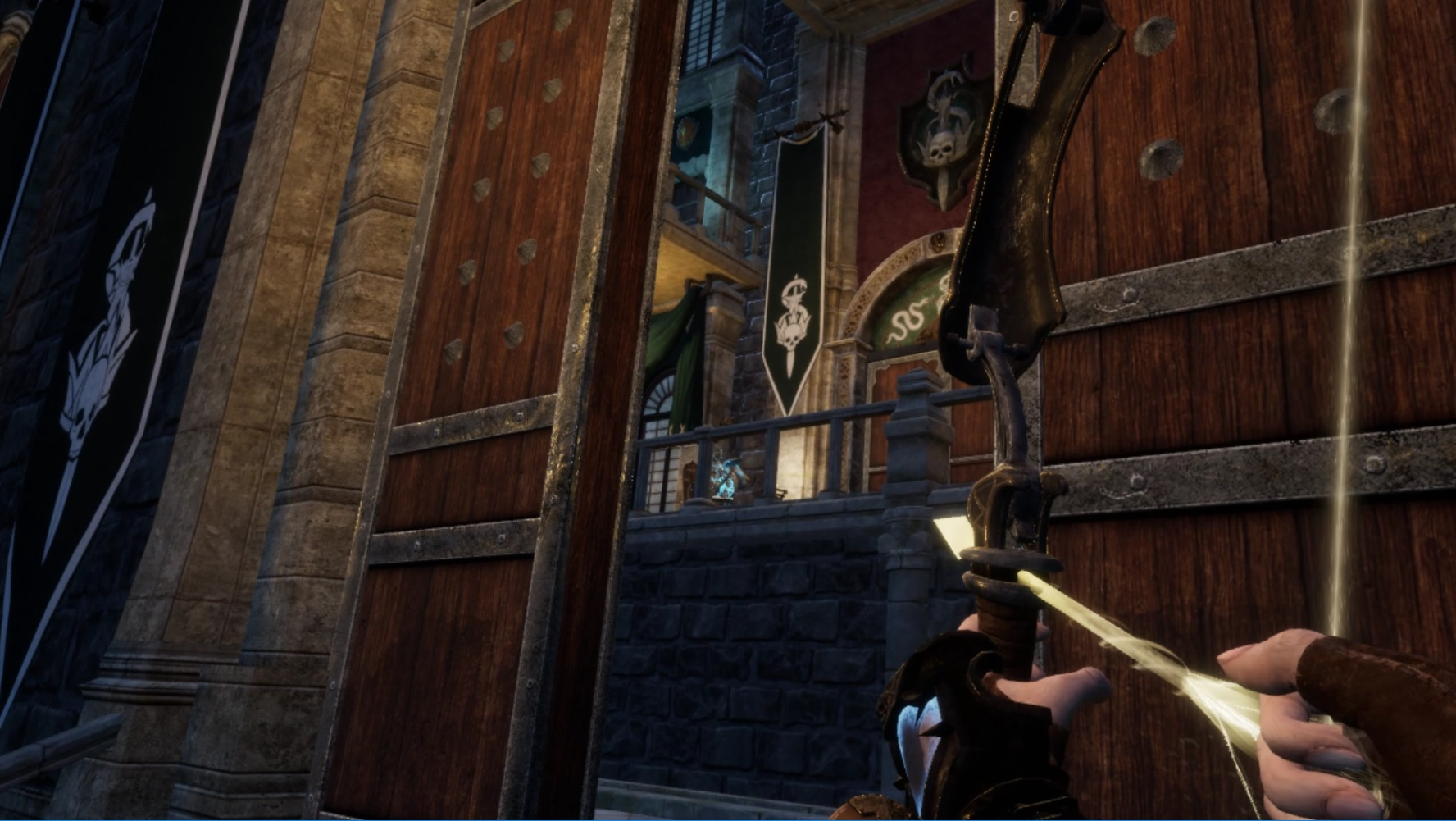 There is an added secret in the game, where you must find and collect certain "cards." If you find them all, then your main sword gets a nice upgrade. This helps a lot with that final battle! 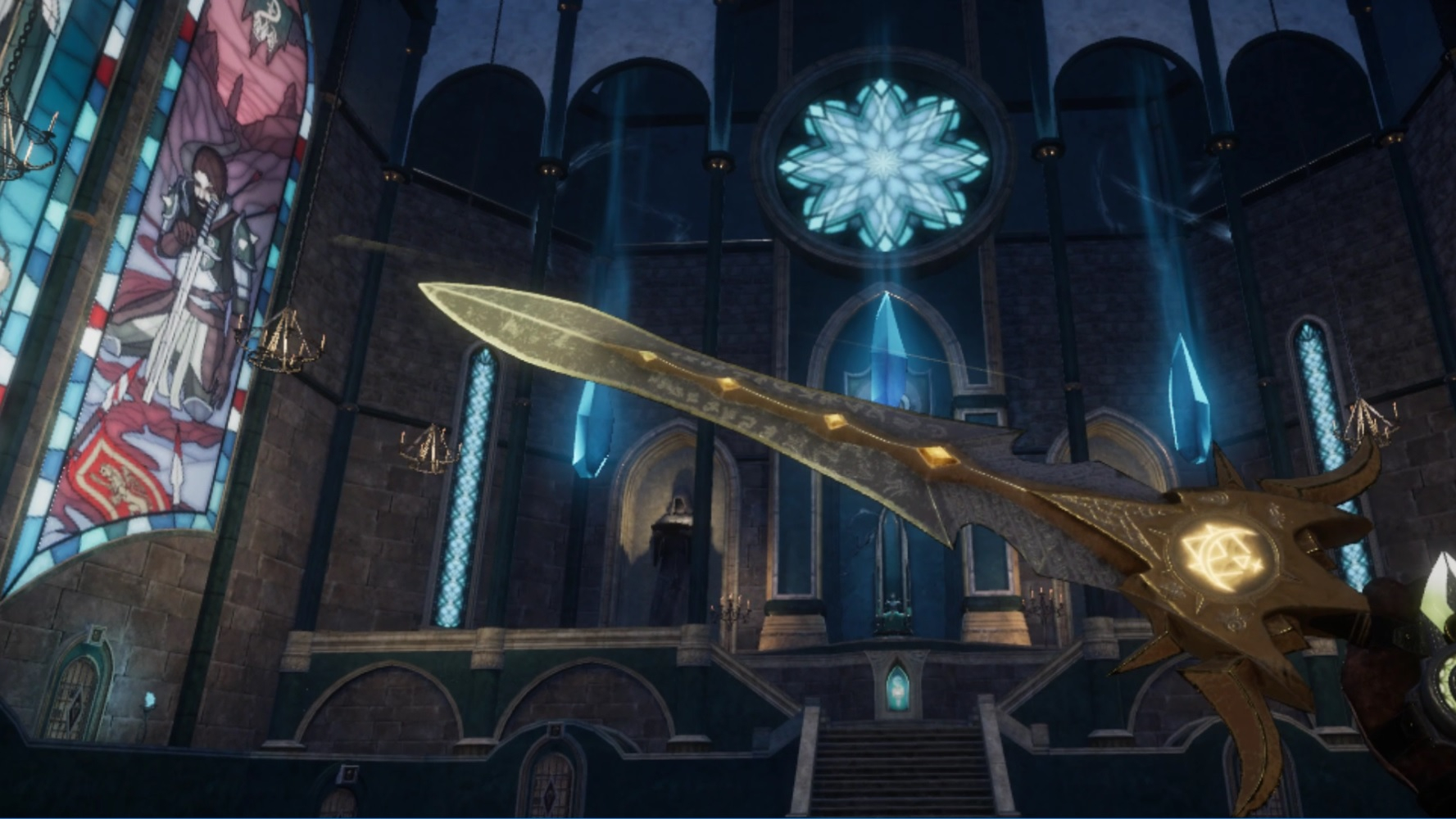 Puzzle Solving
There are a variety of puzzles throughout the game that will require you to think things through (in contrast to those VR Adventure games where the solutions are either painfully obvious or spoonfed to the Player). Granted, some puzzles are certainly Easy and can be completed quickly thanks to the game's hint system. However, there are a decent amount of puzzles that simply leave the Player alone to figure it all out. There is one in particular that stumped me for a solid 20 minutes.
Some puzzles are direct and involve you staring at a challenge and thinking your way through it: 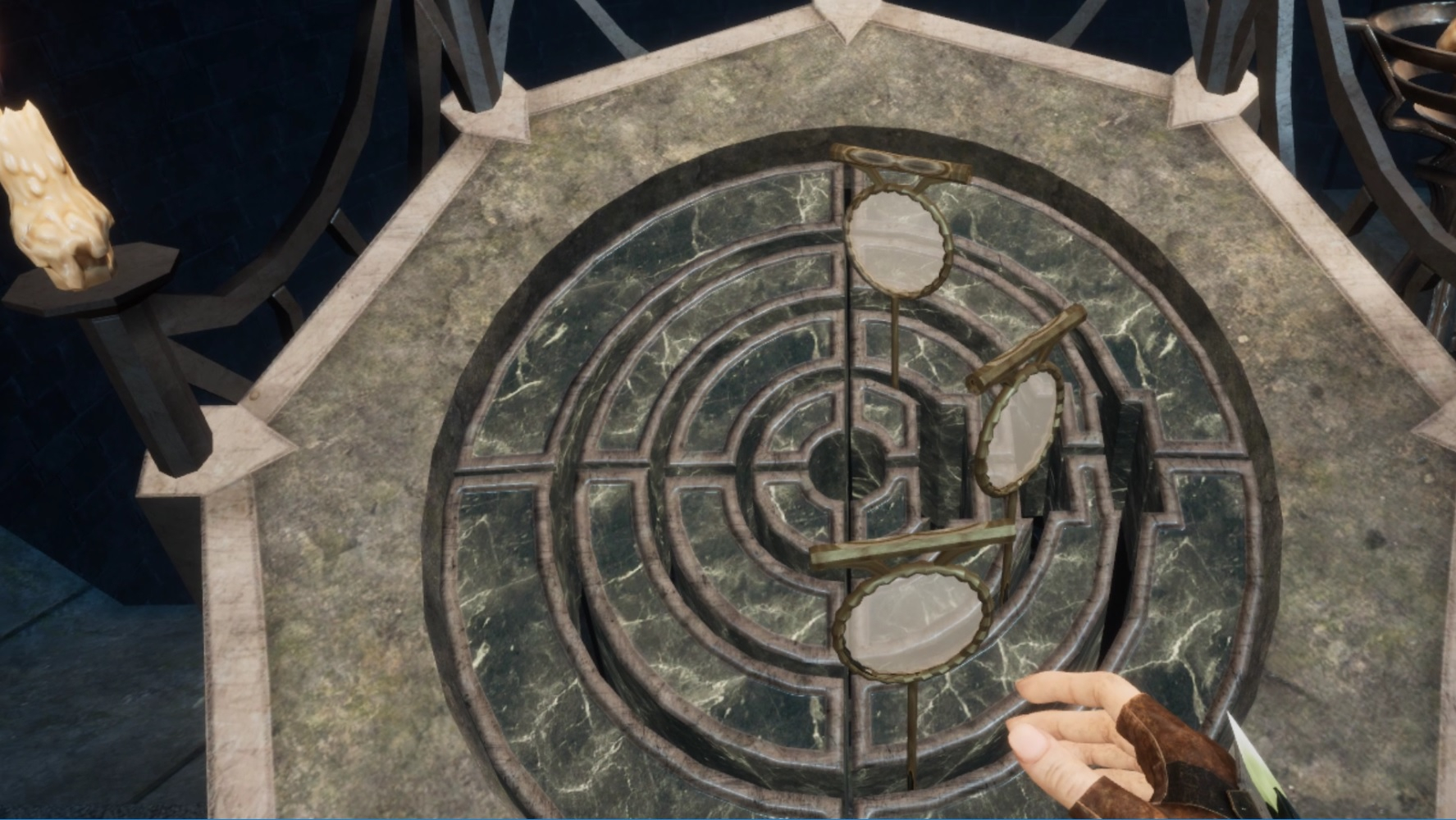 Other puzzles rely on your trusty Energy Whip: 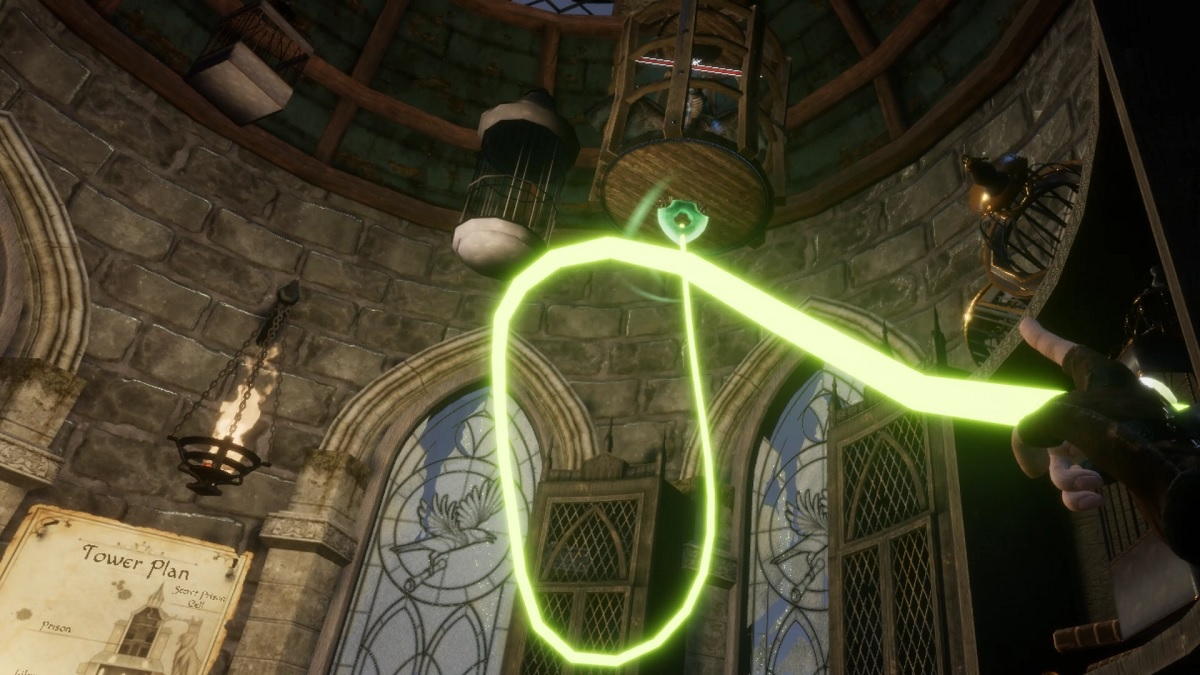 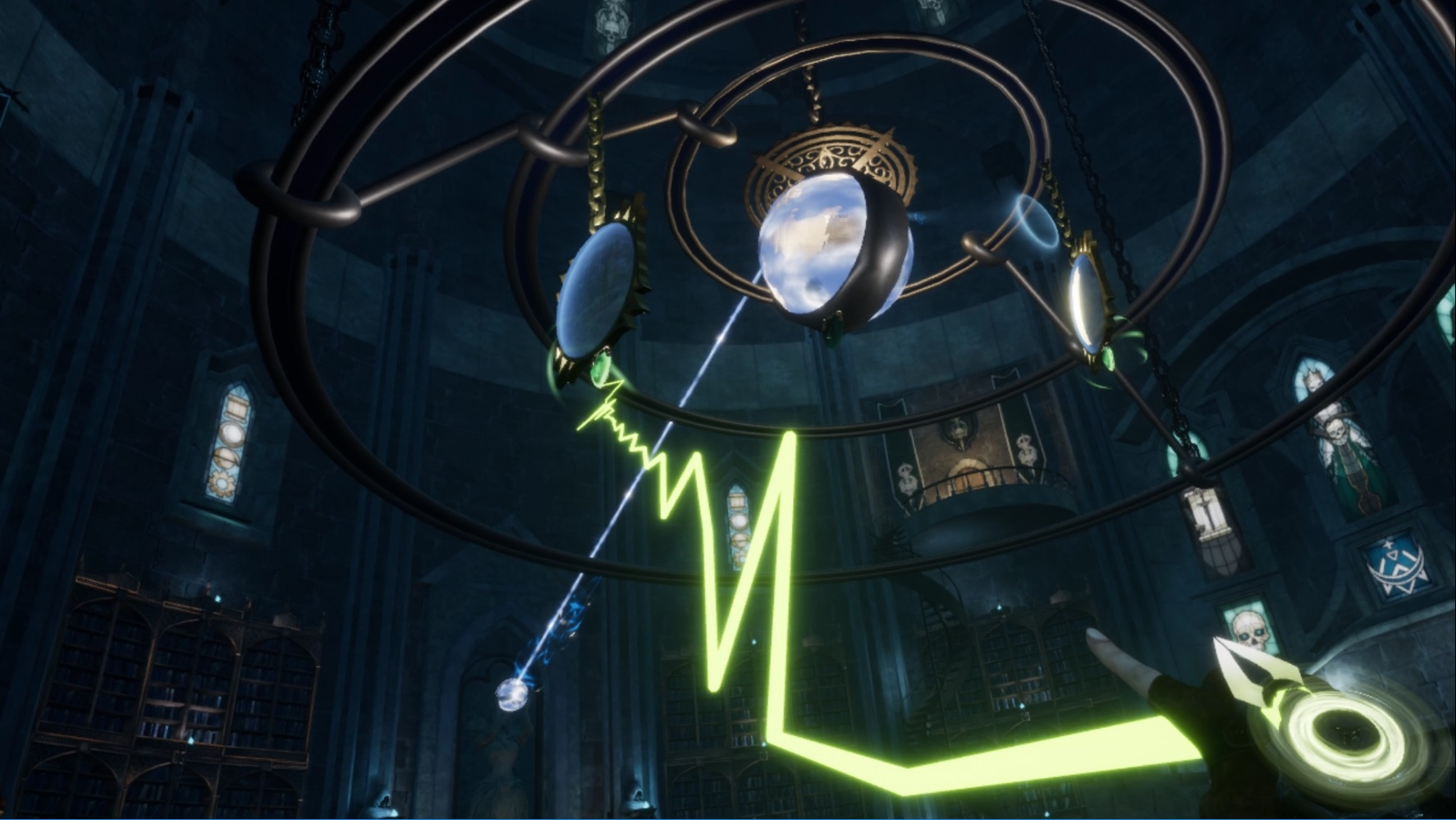 The game does have a hint system but it's rather creative. It comes in the form of one of your mage powers, where you can temporarily see a magical version of every room (thus revealing key secrets). Again, this is similar to Mage's Tale where you could use those Crystal Balls to reveal hidden areas. 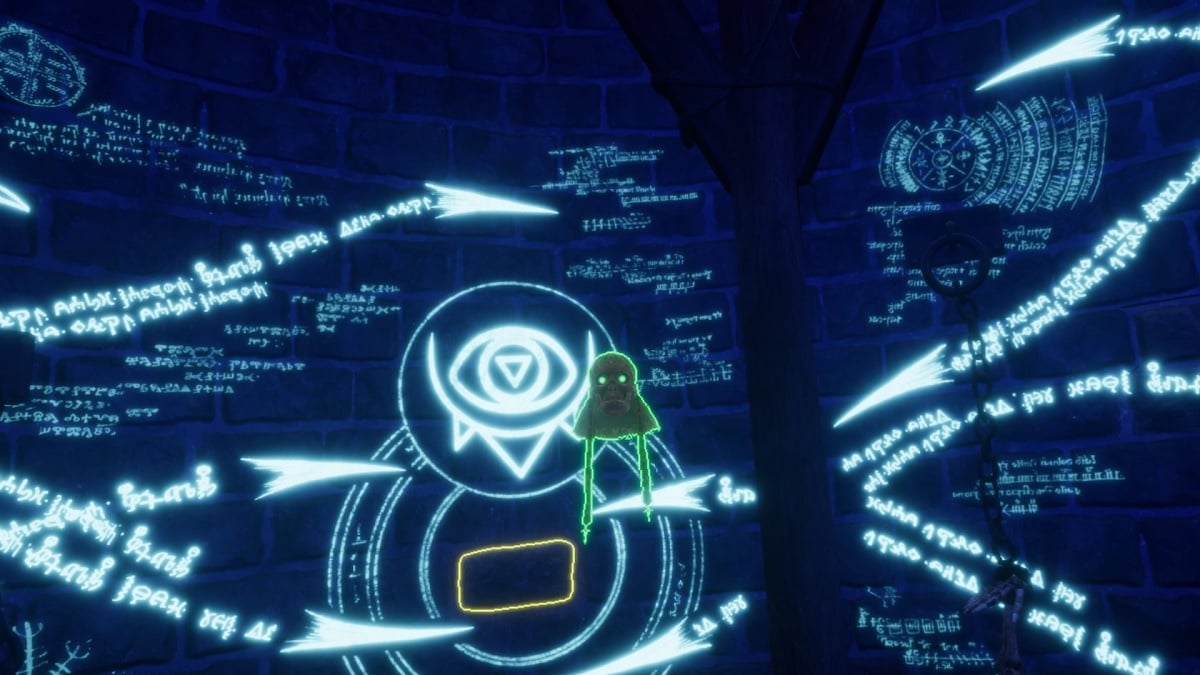 The floating skull fella in the above screenshot is your trusty companion!
Overall
The graphics are more than acceptable; the gameplay isn't exactly AAA caliber but still enjoyable; the story and atmosphere are entertaining. I would really love to see the developers expand upon this game and its universe. There is something really unique that has been built here, and I feel that there's so much more that could be offered with all of the features at the Player's disposal.
The game controls are kind of a pain. Both Teleportation and Locomotion are supported, however, you can only use your Thumbstick to turn in one direction! You can only make Right turns, which is silly. It wasn't much of a problem since I can simply turn my entire body thanks to having a full 360 VR setup. But for anyone who relies on the Thumbstick to turn, this can be a bit annoying. Another gripe is that the Player can often get stuck in certain parts of the game; stuck in a way where you can't move anymore. In order to overcome this you will need to temporarily switch from Locomotion to Teleportation. I've encountered this problem before with games that try to offer both Teleportation and Locomotion. It doesn't happen often (I believe it was less than 5 times total), but when it does... it can be irritating.
When all is said and done though, I really enjoyed this VR experience and look forward to more work from this dev studio.
Are you a fan of the Myst games? Check out my Mod at http://www.mystrock.com/
Catch me on Twitter: twitter.com/zenbane
Tagged:
4