superllama Posts: 144 Art3mis
October 2013 edited June 2016 in Showcase
6/6/16 - I finally rewrote the OP... editing this literally gave me a migraine but it's finally cleaned up! If you want to look at the old one for some reason, I archived it here pastebin.com/VDfZgTvB
*ahem* anyway.

WHAT THIS IS
This is a program that hooks into Morrowind + MGE 3.8.0 and, with certain settings disabled, adds fully playable (except character creation) support for the Oculus Rift.
This is different from configurations for vireio and vorpx because it actually decouples the view from the menu and draws the menu as a 3D projection, meaning you can look around separately from where you're aiming and lean forward to zoom in on game text, and it automatically levels your view pitch so you can play it standing up without getting dizzy.
It's written from scratch in C, so there are no dependencies other than Morrowind + MGE 3.8.0 and the Oculus Runtimes.
Here's a badly recorded gameplay video showing off the features (and bugs) in the already-out-of-date version 3.0 (one of the bugs in the video is already fixed!) 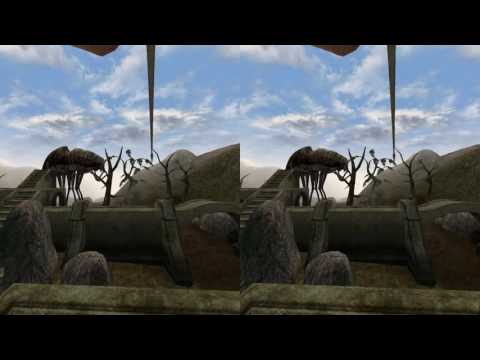 (NOTE: if somebody with a decent GPU and recording program wants to take a video of their game window running the latest version of Morrowrift, I'll put it here-- right now all my videos are laggy and ugly because my GPU is old and I don't know how to use OBS)

WHY 3.x?
You might be wondering how this is version 3 when it's so basic... short answer: this one is (theoretically) way more stable and optimized than before due to it using an entirely different structure and coding scheme. Long answer: the first one was DK1 only and was a direct fork of MGE, meaning you had to actually replace MGE with my DLL. Version 2 added DK2 support, and was an extra layer on top of MGE that worked the same way-- that is, by pretending to be DirectX. This version is a standalone program that injects a DLL directly into Morrowind much like VorpX or Vireio, except this program is specifically made for Morrowind/MGE and doesn't have any other dependencies.

WHY ALPHA? (BUGS)
There are still a multitude of bugs present in this version, some of which were even fixed in an older version, but as I've abstracted the code more and more in an attempt to make my edits more portable to other games, certain things got harder to fix. Here's a list of all known bugs that I can think of right now: Even aside from all that, I'm not 100% sure how well this will run on varying systems, so until a few people test it and confirm that it works, it'll be an alpha. Once enough people are able to run it (which may entail some bugfixing) and I improve the launcher a bit, I'll call it a Beta again.

DOWNLOAD
You can download 3.0.2 Here-- Google was yelling at me for uploading an EXE or something so I had to encrypt it so it wouldn't try to scan it. The password is simply "uh" because that was my reaction to Google taking my first upload down. (Just ask this scientician)

If you have a DK2 and you'd rather run the old unstable 0.8 version for some reason, you can still get it Here. There are instructions for using it somewhere in this old archived post.

SETUP
I recommend starting with vanilla morrowind (goty is fine) since I don't know how different mods (especially MGE and MWSE mods) will affect this. Once you've got it working you can start adding things in and making sure they don't break it.
The first thing you'll need to do is install and set up MGE 3.8.0.
Eventually I want to try to add support for MGE XE and some of the more popular shader mods, but that's a long way off.
Make sure your game has this message in the top left corner before proceeding.
If you're running the Steam copy of the game you'll need to set Morrowind.exe, Morrowind Launcher.exe, and MGEgui.exe to all run as Administrator before this will work.
Next, since this version is still a bit finicky, you have to make sure you run it with the right settings or it will probably just sit there and not draw anything, or render everything totally wrong. Unless you want your game to look that way (or like nothing), you'll need to disable the following MGE features in MGEgui: I'm working on getting these features supported but it's very very difficult to do unless I actually modify MGE, and I'm trying to avoid doing that in this version in anticipation of someday retrofitting other games (yes, including skyrim) that don't have open source graphics extenders that I can just rewrite. That's the only reason the ancient DK1 beta version seen on my youtube channel had Distant Land-- I actually modified MGE to add support for it.
If the font size is too small for you, you can choose a lower resolution like 1024x768 and the in-game text will be bigger, but you may get extra aliasing if you do that. Some resolutions render incorrectly right now though like 1600x960.

RUNNING
Just make sure Morrowrift.exe and Morrowrift.dll are in the folder with Morrowind, and run Morrowrift.exe (not Morrowind or Morrowind Launcher). If you're running a Steam copy of the game, you need to make sure Morrowrift.exe is set to Run as Administrator.
If you need the Steam Overlay for any reason (for instance if you use a Steam Controller) You should be able to add Morrowrift.exe to steam as a non-steam game too and still have steam inject its overlay, and if you want to do it with an actual Steam copy of the game you may have to Steam itself as Administrator before it will let you do this (and you still have to add Morrowrift as a non-steam game and run it that way). This may not work for everyone but I was able to run both steam and non-steam copies of Morrowind with Rift support and Overlay support simultaneously.
One caveat with the Steam Overlay though-- for some reason it draws underneath the Morrowind menu right now, so if you accidentally open it on the main menu or during a cinematic, you won't be able to see it. If you can't move the mouse on the main menu try hitting Shift+Tab and see if steam overlay was open invisibly behind the menu.

COMMAND LINE ARGUMENTS
If you run Morrowrift.exe with -nolevel you can disable the auto pitch levelling, but I don't really recommend it since it can make you dizzy. However if you absolutely cannot stand the menu moving up and down all the time when you aim independent of your head position, this feature can be disabled.

This is currently the only command line argument but I'll probably add more options as time goes on, depending on what needs to be customized.

DONATE
If you love my project and want to throw in some motivation for me to continue to add new features, new hardware support, and maybe even new games someday, you could make a Paypal Donation and give me a great excuse to work on this project instead of other stuff :P

PLANS
First things first, I need to fix bugs. If I can get distant land, anti-aliasing, shaders, and MGE XE working well, I'll consider it a major, major victory. Once I have at least MGE working perfectly I may also try to tackle Oblivion and Skyrim support alongside of MGE XE, since they'll have similar shader setups. MGE XE has the benefit of being open source so I can actually look directly at how it works, which may help me structure the code so it works with newer games.
As a side goal, I'd also like to implement SteamVR support instead of just Oculus support to my codebase. Right now I'm saving up for a GTX 1070 and HTC Vive so I can do this, so that's probably what any donation money will go towards. My current GPU is an old GTX 770 which can barely even run things on the DK2, so if I'm going to get a Vive which has no Async Timewarp I'll definitely need a better GPU to go with it.
If I do get a Vive, another pie in the sky goal would be to hack the game so much that your hands and weapon are drawn based on motion controls, and one of the four weapon moves is performed depending on how you move your hands. This would be so insanely awesome I'm kind of afraid to even mention that I'm planning to try it, since it's probably nearly impossible, but hey, I can dream.
8
«1234567…10»