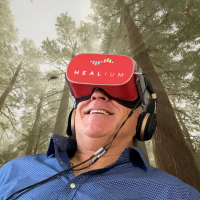 storyup Posts: 8 Brain Burst
June 2020 in Oculus Go
Oculus might not realize it but they just hurt a bunch of non-profits that rely on the affordable Oculus Go to distribute their content to aging and disabled populations. With the sunset of Oculus Go in December, these groups were given only 6 months to try to raise money for new Quest headsets. Honor Everywhere is a free app on Oculus Go that allows terminally ill Veterans the chance to visit their Vietnam, World War II, Korea, Women's and Veterans Memorials. The pandemic has grounded air travel so Honor Flight hubs are not able to physically travel to DC. They were using Oculus Go to allow aging Veterans their dying wish to virtually visit their memorials in VR. Unable to afford to buy the pricier Quest headset, this is an unfortunate decision for Oculus to make. And leaving nonprofits just 6 months to raise money in the middle of a pandemic for a new headset is sad. Not everyone uses the Oculus Go for gaming. It's used for pain control, stress management, and virtual travel.  Not everyone is able to walk around room-scale. Not everyone has the use of their hands for hand tracking.  Was your accessibility team consulted on the decision to sunset the Go in just 6 months? Any chance you would consider doing it in June 2021 to give non profits more time to raise money for the Quest?
5