Update May 11 - Final APK
It's been a fun couple of weeks but I'm glad that it's finally over. Been working after the kids get into bed and it's starting to wear me down. All in all, I'm very happy with the end result - and I hope you all enjoy playing it as much as i had doing it. 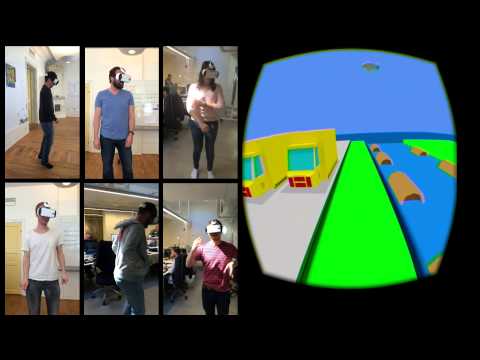 Update May 8 - test apk
Controls - just jump!
Lots of things left to do, but it would be nice to know if it's working or not. 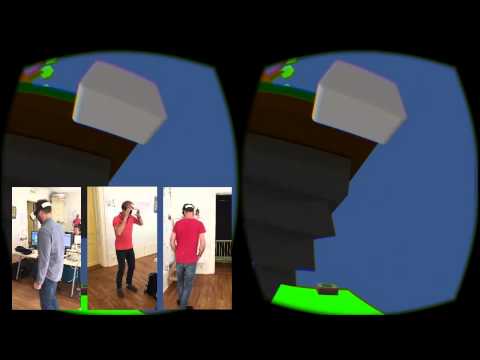 2 of 3 islands in view, everything is unlit (except the island) and a lot of placeholder meshes till there.

Premise
In the game Kangaroo Dash you find yourself stranded in a unknown world that consists of multiple floating islands. In order to find your way back home you will need to visit multiple islands, overcome obstacles and avoid deadly traps in order to collect the vital information needed to repair your ship and begin the voyage home.

The control scheme challenge
Since traversing and exploring large open worlds in a first person view is one of the most difficult things to undertake in virtual reality we first need to solve two problems.

In Kangaroo Dash I have solved these issues in one single blow.

Using accelerometer input the player is able to traverse the world by jumping between points in a fixed grid. The inherent unpredictability of the human jump combined with the player doing the *actual* physical movement keeps the nausea at a minimum while still being able to freely roam the environment. Since the input solution is natural it is very easy to get into “the zone” when the game loop tightens later in the game.

Aesthetics
To keep the game running at a cool 60 frames per seconds the game uses low poly aesthetics combined with baked textures to keep the draw call and vertex count to a minimum.

Moving forward
If the game is somewhat successful in the community it would get a makeover before releasing it into the wild. I do think that this game has a *“you gotta try this!”* potential from a user and a spectator perspective, which would make it an excellent title for an emerging platform like the Gear VR.

Since I love a challenge more than the end result I'll try to accomplish the following.

- Learn Unity, but since my day job is working with C# I'm kind of hoping this will be easy..
- Sharpen my Blender skills. In the 2013 jam I made a snake and a arcade cabinet but I'll try to do better this time.
- Learn SunVox! Seems like a great way to make music.

The idea is to create some sort of physical obstacle course without making the player nauseous. I got most of the game-play elements done and since I'm hosting a real world game jam this weekend (ludum dare!) I'll probably spend the weekend iterating over various game-play issues and trying to make the feel of the game as smooth as possible.

On the graphical side of things the plan is to create some sort of low-poly world that wont tax the note too much, but we'll see how that goes.