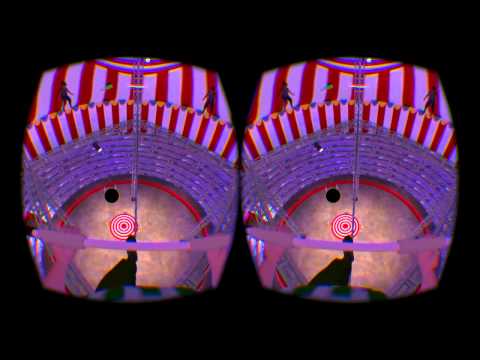 Inspired by the amazing televised feats of Nik Wallenda, this controller-free game lets players step out onto the wire at terrifying heights, attempting to ignore an assortment of distractions while maintaining their balance one step at a time until they reach the other side.

This submission will feature controller-free gameplay. Forward and backward movement are triggered by looking down (forward) and up (backwards). The speeds are scaled depending on the amount of head tilt. Deadzones between the forward and backward boxes allow the player to stop movement while additional deadzones at the high/low points allow the player to look directly up or down while remaining stationary. Balance is one of the key aspects of the gameplay and is calculated using the amount of head roll multiplied by the speed of the player's movement. Attempting to race forward to beat the clock will greatly magnify the difficulty of maintaining balance. Base scoring will be simplified to time and lives remaining. Some levels will also include time bonuses and/or penalties depending on the challenge required. For example, having to cross the wire while balancing an object on your head would result in a loss of points if the object falls but the player still successfully crosses to the goal.

Safely and quickly crossing the tightrope is already challenging on it's own but we are throwing in plenty of distractions to help shift the player's attention and balance. Although the final distractions that we intent on including for the challenge are still being planned out, some examples include positional-audio cues, objects thrown at the player, aerial trapeze artists swinging closely by or overhead and blinding spotlights (depending on engine limitations). Engine Limitations: This game is powered by the UE4 engine. Unfortunately, GearVR support is currently minimal at this time. We have been able to work around a lot of these limitations with the latest source builds containing several GearVR workarounds and fixes by Epic's JJ Hoesing. However, many limitations still remain including the lack of mobile HDR and movable lighting. This limitation has forced us to remove one of our favorite distractions, the moving spotlights.

Controls: We could have taken the easy approach and required the use of a gamepad. By doing so, developing the player movement would be a quick implementation allowing us to focus to other aspects of gameplay. However, this not only felt too "safe" from the challenge perspective, it also felt too safe in-game. The feeling of risk and danger seems to elevate when the controls are tethered to your head instead of your thumbs. We still have a lot to figure out with this approach but we're up for the challenge. Our primary focus it to allow a comfortable experience (as I am EXTREMELY sensitive to simulator sickness). We want the only feeling of discomfort to be caused by the nauseating heights, not the character movement.

One of the most challenging issues to overcome with the controller-free movement is the lack of positional tracking on the mobile platform. Ideally, we would have liked to use forward and backward lean for the movement and leave head movement for looking around. We hope that the added "deadzones" for hit detection offer a decent balance between the two.

Hardware Limitations: It goes without saying, designing a great VR experience with the limitations of mobile hardware is no easy task. We've had to make several sacrifices in terms of assets to use but overall, we've been amazed with what the Note 4 can run (after a LOT of trial & error and optimizations).

OS Limitations: We initially hit a major roadblock during the start of our development when all of our builds resulted in just a black screen when launched on the GearVR. This turned out to be an issue with the Android 5.0.1 OTA update that was pushed to my phone a few weeks ago. After identifying the root cause, I went through the process of reflashing with Android 4.4.4 which was immediately followed by the device being stuck in a boot loop. Clearing the cache had no impact and a factory reset was needed to resolve the issue.

tl;dr - Don't upgrade to Lollipop anytime soon. If you already did, backup your device before you downgrade in case you too require a factory reset.

If we are awarded a prize for this submission (or there's enough interest), we have plans to develop additional levels with their own unique challenges. This includes walking between two skyscrapers in a downtown city environment, crossing a vast arid canyon and for the ultimate thrill-seekers, stepping between two bi-wing planes tethered wingtip to wingtip as they soar over the fields and pass through the clouds.
Meerkat Gaming Dev