RealNoFake Posts: 3
May 2015 edited May 2015 in VR Jam 2015
We decided to take part in the following contest for which we made this game – ski jumping.
Our poroject: http://challengepost.com/software/vr-sports-ski-jumping 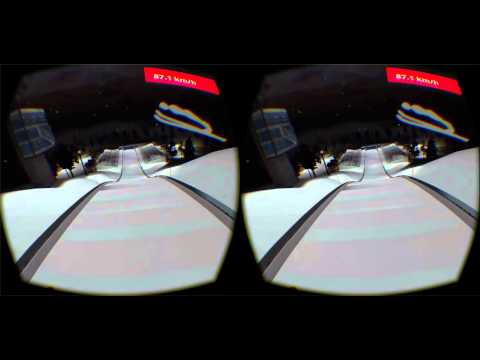 We decided to program it using the Unity 5 platform since it’s been a reasonable time since its release and thought that something should work out. Everything was going well and there were a few days left (we had the game working ideally on the Unity Editor on the computer, but the biggest problem was we didn’t have the necessary equipment - Samsung gear Vr). The administration of the contest had given all the competing teams testing facilities, but for some odd reason there were none in Russia (possibly because of sanctions?

). We also couldn’t find the Galaxy Note 4, but managed to get our hands on the Galaxy s5, on which to our astonishment managed to launch the game.
The first problem that we encountered was the inoperability of the Directional Lightmap underneath the Android. The moment when the skier jumps it would flash with different Lightmaps.
We had to redo the whole thing and it’s not a secret how long this kind of stuff takes on the Unity 5 platform.
After redoing this process we came stumbled upon another issue – we noticed that with the current LightProbe on the skier from time to time he would lose certain parts of his texture becoming gray. We managed to solve this problem by making him Unlit and used the shader Unlit/Texture, which caused the application to just randomly crash. It took a considerable amount of time to understand that all of this was occurring because of the Unlit Shader. For some odd reason everything would stop crashing if you just change the shader on the skier to Mobile/Diffuse… the skier would appear black, but we understood we didn’t physically couldn’t look more into resolving this issue (it was already 4 A.M.). We shot the video using the editor which is why the skier doesn’t appear as black.
In conclusion we sent the build around 4:30 A.M. Moscow time and it was about 6 and a half hours after the deadline. The moderators told us that our ship had sailed since we missed the deadline, that it wouldn’t be fair for the other teams, etc.
But according to the rules of the contest sponsors (Unity and Oculus) are allowed to change the following decision and allow us to take part in the contest. We hope that since these rules can be applied that our build does end up being accepted and that we can be take part in the contest.
We would like to point out that it isn’t fair to accommodate certain competitors or certain countries with testing facilities. Our last day was spent fighting to fix problems with the Unity 5 platform and not the game itself.
We haven’t had any prior experience in these types of contests and didn’t think that such a little mistake on the deadline would become such an obstacle for our participation in the contest. Otherwise we would of submitted the build with the flashing Lightmaps.
I believe it would be fair to give us a chance considering we were at a disadvantage starting from the beginning by not having any testing facilities provided.
0