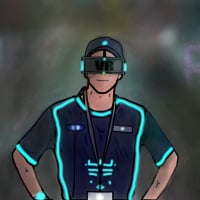 Oculus Start Member
July 2018 in General Development
As I have updated my splash screens I decided to check them out in the Rift HMD store, with the few search options available I chose all games & browsed from A-Z to find my early access title 'Cyberdrifter' and was surprised it wasn't there as it is a game after all?

The only way I could 'discover' my title was by selecting the Browse all tab (which is just barely sticking out of the middle of the floor of the store) and then flicking the thumb-stick slowly to the right 32 times (it actually took a few minutes to figure how to scroll the list as I was trying to grab the scroll bar with the pointer and drag, not very intuitive), thankfully my game starts with a C and is not in the middle of the alphabet!

Why isn't there a search tab for 'shooters'? It is one of the most popular genres in VR!

If your selling an early access title & it doesn't fall under the limited search options then you have next to no chance of being discovered.
Tagged:
0