Welcome to my WIP thread for my submission, a kart racing game which is heavily influenced by my Mario Kart project which I stopped working on for fears of getting a Cease & Desist, I have since then wanted to create the same game but with my own assets, and I saw the Mobile VR Jam as a great opportunity to do that. 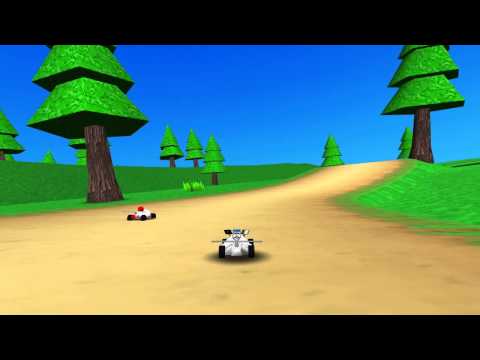 This project is a challenge for me as I came into it knowing basically nothing about 3D Modelling, and have been learning while I develop the assets I need - I've luckily learned a pretty interesting way to build tracks, and have got ideas for 4 total courses.

Current Features:
Here I'll detail what I hope to get into my final build, not all of this stuff might be finished in time but I would love to get it all in:

Cliffrock Coast
Current Status: 55% Complete
Laps: 3
This track is very simple and is intended to ease players into the game, based on a peaceful cliffside, the road will be smooth and relatively flat, taking racers along the cliffside, over a bridge, past a lighthouse and through a small wooded area. This is the simplest and smallest of the 4 included tracks. Mount Thundersmoke
Current Status: 55% Complete
Laps: 2
This track is my personal favorite, the race begins by taking you along a windy forest road, with a huge thunderstorm raging. As you come out of the forest you will begin the ascent up the huge volcano - Mount Thundersmoke. The road twists up the mountain like a snake, and then takes you inside the volcanic chamber along a bridge, before it loops up and around the crater and then launches you back down the side of the mountain. This is the largest track and so only has two laps.

Frostfreeze Forest
Current Status: 70% Complete
Laps: 3
Set in a wintery forest, this track will take you along a snowy road, down along the side of a freezing lake, and then through some icy caverns, where icicles could detach and fall upon unsuspecting victims. This track is more complex than Cliffrock Coast but is relatively tame compared to Mount Thundersmoke and Cloudgate Skyline. Cloudgate Skyline
Current Status: 5% Complete
Laps: 3
The most bizarre track in the game is Cloudgate Skyline, inspired by the Rainbow Road levels in the Mario Kart games, this course is set in a deep blue sky, taking racers along golden roads through the blue and defying physics by taking you along rainbows that twist in every direction, players will also bounce on the fluffy white clouds. This track is probably the least tame of all of them, as you will be driving upside-down, sideways, and bouncing on clouds.

Bear Trap
The bear trap will be a droppable item that will close on anyone who drives over it, temporarily stopping them.

Standard Missile
The standard missile will move straight along the road, bouncing off walls until it hits a racer, temporarily stopping them.

Golden Missile
The golden missile will home in on the racer in front of you, however will explode instantly if it hits anything else.

Super Missile
The super missile will launch up, pause for a moment and then home in on wherever the player is looking, like a laser-guided missile, it will explode on impact.

Flux Core
The flux core is a golden battery which will give your car a temporary boost.

Snail Slime
The snail slime will be dropped behind the user for 3-7 seconds, leaving a trail that will slightly slow down anyone who drives over it.

Currently, the game does NOT support multiplayer and I do not know if I will support it, simply due to time constraints. If I can reach all my other goals and have enough time before the deadline, I will look into trying to add some form of multiplayer, however due to my lack of mobile development experience, it may not happen.

However - I would like to continue development on this after the Mobile Jam, win or lose, and will release a more feature-complete version in the future with more tracks, items and vehicles (currently just one), and of course multiplayer. I'll also consider working on a PC version for the Rift.

I will update this post with any screenshots and videos of progress during the Jam, and would love to hear thoughts or suggestions if you have any.