tomazvovk Posts: 61 Hiro Protagonist
December 2016 edited March 2017 in Unity Development
Hello, I am having a strange problem since the latest Oculus/GearVR update (not sure which one it was

). When I click on a button in Editor it works as expected, same when running the app in dev mode on the phone. But when I put the phone into Gear VR, clicks/taps are executed twice. I tried debugging via Wi-Fi and adb printed debug text from the same function twice (looks like in different frames though). I am using OVRCameraRig, GazePointerRing (from sample framework) and OVRInputModule. Buttons are standard ones from Unity's UI.

I tried to run older version of the app made in Unity 5.4.2f2 and it has the same porblem. I know that it worked before.

Here is additional information on GearVR/Oculus software installed on the phone:

You can see the OVRInputModule settings in the image below. "Invert Swipe Y Axis" setting was added by me but it doesn't affect clicks. Any help appreciated! 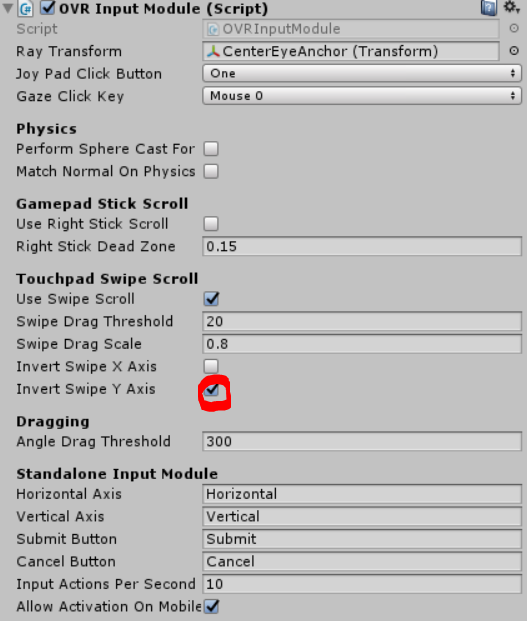