A few days ago, the eleder scrolls online has been released for pre-order players.
I tried playing eso with my oculus dev kit and tridef3d software.
Although playing in Direct X9 mode, It looks fantastic and i'm enjoying very much traveling in Tamriel.
I think the game itself is amazingly interesing. I love its music (cool!!! it worth bucks!!!), environment and story-telling.

The first-person perspective of eso looks really awesome and very playable with oculus rift.
The only complaint of mine is the low resolution of display (hard to read lore) but I think
it doesn't matter for dev kit 2 or upcoming commercial one.
For me, there is little motion sickness and I played for over three to four hourse without rest. 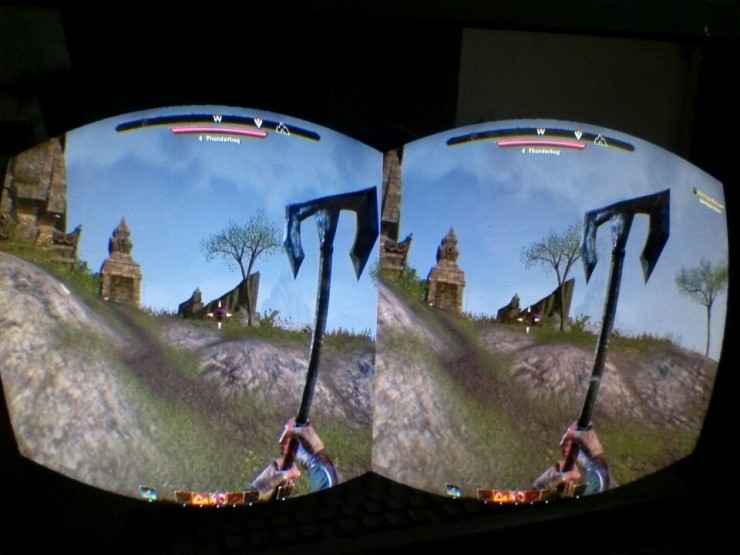 3. Change the display type to Oculus Rift in the option of Tridef3D Ignition.

4. Change the executable file of eso (eso.exe in the installation folder) to execute in XP compatiblity mode: right mouse click-property-compatiblity.
(This is because the Oculus addon of tridef3D only supports direct x9.
The XP compatibility mode force the eso.exe to play in DX9)

5. Change the backgrounddisplay resolution to 1280X800.

6. Add eso to Tridef3D Ignition and double click it.


Sorry for the broken english. 😄 I just want to share my awesome experience!

*TIP: In game, you can switch to smaller FOV by pressing +. This help a lot when checking the journals or inventory.
0 Kudos
Share
Reply
19 REPLIES 19

mtbs3d.com/phpBB/viewtopic.php?f=3&t=4123 I am looking into that LEEP VR I lack practical 3d knowledge, I have found some good links, but I am not sure if they are the ones you were talking about. Would you mind direct linking me to them? :oops:
0 Kudos
Share
Reply

Is it possible to invert the "look" control on the thumbstick, without inverting the response of the Rift? I have never been able to get Skyrim to work properly because of this, although maybe I should try again. Am tempted to try ESO, but swore off MMOs years ago as they are far too time-consuming!
0 Kudos
Share
Reply

Also, a video of this in action would be fantastic!
0 Kudos
Share
Reply

I also got it working using Vorpx. Run game in compatibility mode for XP and all is groovy!
0 Kudos
Share
Reply

"CountBorgula" wrote:
Is it possible to invert the "look" control on the thumbstick, without inverting the response of the Rift? I have never been able to get Skyrim to work properly because of this, although maybe I should try again. Am tempted to try ESO, but swore off MMOs years ago as they are far too time-consuming!

Sure it is possible with tridef calibration option.
You can change the sensitivity of head tracking, then you may just change the sign of the sensitivity like -100.
I agree with that the MMos are time-consuming but I strongly recommend you to play ESO because
the every moment of playing this game doesn't feel like time consuming; the every moment is intereting (at least for me), espsecially in Oculus Rift.
0 Kudos
Share
Reply

So what settings are you using for

"timplaisance" wrote:
So what settings are you using for

Its working, I'm just looking for some good suggested values.

This sounds amazing, I can't wait to try it! Thanks for posting this up, I would of never knew!
0 Kudos
Share
Reply