I was reading this feature: http://www.stuff.tv/vr-challengers/feature

The features that I'm really hoping make it to CV1 would be:

1. InfinitEye’s two 1280x800 displays and Fresnel lenses provide over twice that, drastically increasing your peripheral vision to 210º and ramping up the feeling of immersion.

2. Fove is the VR headset that watches you; with its eye-tracking technology.

These features plus any others that the guys add would be fantastic and really help with motion sickness and immersion. Does anyone know anything about these ?
0 Kudos
Share
Reply
22 REPLIES 22

Oculus Rift, from what has been presented to this day, will be far superior to anything else.

I won't go into details, since I'm just going to sleep now, but both of the features you wrote about, are not that good if you look at them more closely. Fresnel lenses have its flaws, and eye tracking won't be really usable for at least 2 years, maybe a little less, and maybe much more. And there is a great possibility, that when it finally becomes feasible, then it will cost a fortune, and require ultra-high-end PCs to keep the latency low enough. I mean eye tracing that matters. We'll get simple eye tracking for transferring eye movements onto the avatar, but after FB stepped in, you can be sure that Rift will be one of the first to implement such feature.

As people from Oculus said many times - they're not in some sort of a cave. They know about different solutions. They test them and they choose what fits best. It's not like they didn't think about that technology allowing for 210 degree of FOV.
But you must remember - latency and low persistence are both things you can't resign from, no matter how big FOV you get.

If I had to guess, I would say that there is absolutely zero chance for anyone to surpass Oculus in VR offerings for under $1000, at least until the end of 2016, and possible more, but it's impossible to predict anything that far away from now.
Not an Oculus hater, but not a fan anymore. Still lots of respect for the team-Carmack, Abrash. Oculus is driven by big corporation principles now. That brings painful effects already, more to come in the future. This is not the Oculus I once cheered for.
0 Kudos
Share
Reply

Thanks for the response. Maybe I'm hoping for too much. I am still excited for CV1 but I guess as CV2 etc come out better features will be added even if they know about such features now. It doesn't make financial sense to release the best possible unit that is future proof for more than 1-2 years. It's been a long time that I and I'm sure a lot of other people have waited for VR to get to this stage. These really are exciting times.
0 Kudos
Share
Reply 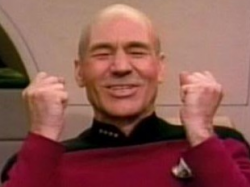 I mean at this point no one else in the world has a team as large as Oculus focused only on VR. Pretty much they have no real competition right now.

Sony is the only other player with the resources to compete but I would bet a lot of money that they don't have a team any where near the size of Oculus. Thats just a normal symptom of a company like Sony doing VR as a peripheral to their core product as opposed to a company like Oculus where VR is their core product. If anyone is likely to take a wait and see approach its Sony.

If CV1 takes off and a consumer market for VR blossoms Oculus will have effectively moved the bar for entry into the VR market out of reach of most start up companies. Its entirely possible still that a company like Sony or maybe someone like Google will come out of no where and try to put out a consumer device first. I doubt it will happen though. Most large companies have probably already accepted that they can't catch up to Oculus in the short term and it is safer to wait and see if the VR market takes off or not.

So in a final answer, what competing devices? No one else is even playing the same game yet, save Sony who has isolated itself to the console market.
0 Kudos
Share
Reply

The majority of these companies seem to be waiting for Oculus to put out their next DK so they can try and copy it. Oculus has a round table of genius. I don't see anything comparing.
0 Kudos
Share
Reply

1. InfinitEye’s two 1280x800 displays and Fresnel lenses provide over twice that, drastically increasing your peripheral vision to 210º and ramping up the feeling of immersion.

Let's do some quick math. Right now it's a pretty good bet that the consumer version of the Rift will have at least a 2560x1440 display on it. The Field of view will probably be somewhere around 100 degrees. While 210 degrees seems impressive the display resolution will be a big problem spread across such a large field of view.

If we do the math Oculus has about 3.8 times more accuracy on the screen. Right now I don't care too much about increased field of view. Not noticing the screendoor effect and being able to read text in VR are much more important issues to fix first. Once those things get sorted increasing FOV will become relevant again.
0 Kudos
Share
Reply

The only competition I could see would be if Microsoft was to jump in with both feet. In the past they have frozen out competitors through unfair trade practices (and taken a whipping in court for it), but they still won the battle.

I think this is getting more and more unlikely though as Microsoft keeps cutting jobs on their way to the 18,000 cuts they have called for (http://seattletimes.com/html/businesstechnology/2024575202_microsoftlayoffsxml.html). They also tend to focus on software with only some peripherals, or hardware like tablets and such that run versions of their OS. Besides, the XBox line probably can't run even a Morpheus-level device so they would be jumping into an arena already dominated by another company, with research programs already well established, and software developers already kicking out great experiences. They would be an also-ran. But then again they were with Zune, the Surface, etc. Common sense and bad design hasn't stopped them from wasting $billions yet. 😉

Oculus teaming with Samsung is kind of a hard combination to beat with Samsung's position in OLED displays and all that Oculus has going for it. I really have a hard time coming up with any plausible competitors though I'm sure the perception of this market has a lot of execs thinking hard how they could break into it.
But... but... but... I just NEED to know about the Baba! The Baba has me hypmotized! :shock:
0 Kudos
Share
Reply

As cyber said, no comparison. And you can't just look at spec sheets or read about wild new tech and say 'that's the one' - you must also factor in the team behind the HMD. Oculus VR has managed to assemble a VR dream team, a team that collectively knows more about the goal they are trying to reach and have the skills to get it there than probably any other team you could care to assemble. I'm mostly referring to Carmack and Abrash here but of course Luckey himself and his passion and drive that started all this is worth far more than some standard business guy trying to crash the party after all the hard work has been done.

When Carmack joined oculus it was pretty obvious this was no pie in sky company, Carmack is 99% of the reason any of us even kept dreaming of VR all through the bleak years thanks to his advances in rendering tech and the promise they held. VR is in safe hands with Oculus and frankly this whole thing seems like something from a dream when you consider how well it's gone and who got involved after all those desperate years of checking out sub-par HMDs only to find no matter what the spec (and they were all crap) that it wouldn't matter without a full team of visionaries, pioneers and passionate super skilled people actively pushing it (not just putting out the HMD like so many of the old companies and leaving it there). VR is more than just a HMD and Oculus know that and are putting all they have behind it. No other company past or present is doing that and I doubt any future company will, the company is more important than a spec sheet but thankfully they will have that pretty much sorted too come CV1 (then 2/3 etc) 🙂
EX DK2/VIVE/PSVR | Currently RIFT CV1 & Quest 2 | Future Reverb G2 | VR developer RTX 3080 FE / 8700k / Windows 10 Pro
0 Kudos
Share
Reply