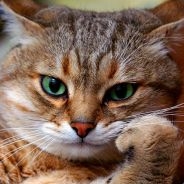 First, let me just say that this post will be a little rushed as I run back to my new VR worlds.

My rift arrived today, inconspicuously packaged, and ready for some good old fashioned "development" (which I hope to actually get to later).

Looking at the cups, I tried to just leave the A cups in and deal with my left eye being considerably more nearsighted. First I wore the rift as I've seen youtubers do, with part of the strap over the ears. This was fine and I enjoyed several hours of VR this way (Let me just say, I'm a lucky SOB who doesn't get any nausea or need to "build" VR legs). I noticed that I was getting the lenses dirty from being too close, and played with the adjustments for a bit before handing over the rift to my girlfriend. She found it more intuitive to adjust the screen out and use the headstrap to hold from the top-back of the head, which I ended up adopting and loving. The lenses now seem to line up perfectly with both eyes and don't drift.

So here are the details you guys care about -

Most games ran perfectly with little modification after running the configuration tool and calibrating/setting IPD. Once I got to Lunar Flight I stopped mirroring my display and only rendered to the rift, removing any graphical tearing.

Screen Door - Doesn't bother me, I have to "look" for it. I can't believe how scared people made me of it. Flatter color games make it less prevalent when I do notice it.

Resolution - The forum made it sound like I'd be looking at 3D microsoft clip-art. Thankfully this is far from true. I see the jaggies and low resolution just like everyone else, but I'm really not bothered. I'd love to play ArmA 3 even knowing that I'll be squinting like hell to see someone two hills away who isn't even getting being rendered with more than 1 pixel.

Color shifting (going by other names, colors "bleeding" around edges of lenses) - Some games did a better job of correcting for this than others, but it was not too detracting in even the worst cases.

Flight simulators and the like are a joy, and the viewport into the world/cockpit is splendid. I really enjoy the implementation in most games.

Games I tried and enjoyed, some of which were bashed but seem to not have the issues I've read about -
Tuscany Demo
Blue Marble
Ciess (well done guys)
vr.training
War Thunder (was not as bad as people said)
Lunar Flight (love the cockpit and how you interact with it)
Anteworld (not perfect, but not as bad as stated again)
Half-life 2 (definitely can see why this one is nauseating for most, not sure how I feel about the mouse keyhole, but I love the visuals and 3D at maxxed out settings/AA/AF. I haven't decided if getting the crowbar/weapons as a point of reference to your body helps versus the empty walking in the intro, or is about the same.)
some others I've forgotten about for the moment.

I don't regret getting a DK at all, even if I never get around to making a nice unity demo with it. With the consumer release still a ways out, this is more than enough for me and I've gotten amazing responses from the 3 people I've let use it in the last few hours.

Go Oculus VR, you guys are doing an excellent job.

To people who are bothered by some of these minor issues, I feel it may be related to the nausea it causes you, and the potential answer lying in improving things that take away from the immersion. But what do I know, you guys tell me! :mrgreen:
0 Kudos
Share
Reply
7 REPLIES 7

Great review! I am seeing a trend where either people hate the resolution and find it unplayable or actually understand the whole purpose of a dev kit. Good on you mate!
0 Kudos
Share
Reply

Great first impressions! Agree with you about screendoor and resolution, but you do start longing for HD res after awhile, you'll see 😉
0 Kudos
Share
Reply

Nice first review. it's a fantastic device and though who really complain about it don't know what they bought.

First, there is an issue with Unity games. When I duplicate the monitor and Rift (Rift set as main), everything looks perfect on the desktop, but when I launch Unity games (like Tuscany, Ocean rift, etc) my monitor goes blank (Rift works perfectly). => HL2 and Mineraft don't have this problem!!!!
In other words, I see something in the Rift but not on my monitor.
I've read some other people have had such a problem, but no sign of a fix other than using the hdmi port on the graphics card (and mine only has micro-hdmi and I have no adapter so FML :P)

- Tuscany with animations : Perfect 3D, screen-door is quite noticeable at first but goes away after a few minutes. The big drawback is the resolution and the screen colors. On my monitors it looks really colorful, but in the Rift everything has a darker tone. Looking at the ceiling of the house is the most amazing thing in the demo (IMO), and the butterflies xD

- Ocean Rift : Omg this one is really crazy; you really feel under water and ghosting adds to the effect. The huge whale impresses you and the 'evil shark' scared the sh*t out of me. Screen door effect and resolution don't bother as much as in Tuscany. Really recommend this demo.

- First Law : Amazing feeling to look inside the spacecraft. The ability to follow ennemies in space just wow'ed me. Screen door effect not noticeable in space ( though it is on the dashboard) and resolution is not and issue with this one.

- Citadel Rollercoaster : Did nothing to me. People on Youtube vids are very sensitive to motion or simply fake.

- Half life 2 : Played 1h before feeling a bit nauseous (but felt light head within 5 min). Mainly due to the character moving so fast. Using crowbar feels really good, resolution is really bad (play the game at 640x480 to compare), ghosting takes out of the experience and screen door is quite present but goes away as in Tuscany. Also the little flying robots are amazing to look at.

- Minecraft : Seeing your body feels great, cubes look HUGE!!! and placing them is just an unbelievable experience (seeing them appear out of nowhere). Seeing the item you wear feels very nice too (especially swords and pickaxes). You can approximate easily at what distance the item is from your head. Flying gives a tiny bit of vertigo and falling makes you lean forward in real life.

Some notes :
Used B-Cups, I'm nearsighted with -2.5 and didn't need to wear contact lenses or glasses.
Dust is your worst ennemy.
Rift is very light and feels quite ''cheap'' plasticky (well, its a dev kit), but I hope it will not break on me anytime soon 😛
0 Kudos
Share
Reply

I agree with the demos we've both tried. Ocean Rift is a good one as it does a great job of hiding the weaknesses while showing off it's strengths.

I haven't had the nerve to try First Law, Minecraft or Half Life. No VR legs yet.

What do you mean by "ghosting"? I know of it as a 3D term whe you see the two seperate images at the same time. That shouldn't be the case with the rift. Hasn't been for me. Do you meant he stutter from the refresh rate?

As to the "cheap" comment, In the rift's defense, light things do tend to feel cheap.

You don't need VR legs for First Law; it's like you're in a car feeling. Every game where you are seated, I find there's no problem with motion sickness.
Just one advice : Don't do barrel rolls in FL 😛

Ghosting is the blur when you turn your head. Screen is not the best and the refresh rate of pixels is a little too low to fool our brain. However it is less noticeable in darker games.

Hehe, well I have to beg to differ on the vr legs. EVERYTHING feels a bit too intense for me. Even the gentle maneuvers in the Titans of Space demo gave me that weird feeling. It's going to be a while before I try First Law. I'll start with some Lunar Flight and go from there.
i7 3820 16 gigs of Ram GTX 780ti
0 Kudos
Share
Reply