since i read a posting here about getting Motion sickness i thought we could work out a warning Screen to use in all Rift games including every eligible warning for Rift-gaming.

Something like :
" Warnings : * immediately stop playing if You feel any of the following symptoms: - Headaches, dizziness, nausea, heavy sweating, excessive production of saliva "

This also could include warnings about having enough room to Play, no open fire, no risky fixtures around,...andsoon

I took your comment as blaming me and the other guys for bringing this up before. Now I realize you talking to Oculus, lol.

I'm glad the warning is so much more tame than anything people thought up here!
(╯°□°)╯︵┻━┻
0 Kudos
Share
Reply

I can't really blame any of you, but there was a little of a sarcastic hint. :lol:
0 Kudos
Share
Reply

For the development purposes I think you can disable the screen or even replace it entirely with your own. I recall seeing something like that in the SDK documentation.
0 Kudos
Share
Reply

Surgeon General's Warning: If you experience any of the following symptoms please take an immediate break, or consult your Coroner. 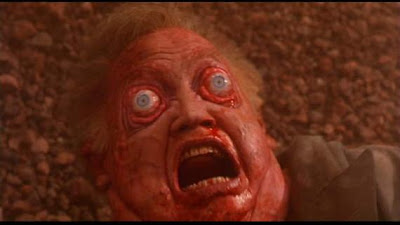 The one issue that I see is that this is going to be one of those "PITA" things that will dissuade people from even using it. To counter our laziness, I would do the following:

Let the developers add in their specific warnings, etc.. for when their game launches. This should be a "best practices" guideline. Oculus could distribute a generic warning label, but allow the developers to customize it if they so wish.
Current WIPs using Unreal Engine 4: Agrona - Tales of an Era: Medieval Fantasy MORPG
0 Kudos
Share
Reply