only just noticed my 980ti has only one hdmi

only just noticed my 980ti has one hdmi, 3 displayports and one dvi and the hdmi is used has its on a 4k tv so for the rift can you use a dvi to hdmi adapter and put it in that
0 Kudos
Share
Reply
50 REPLIES 50 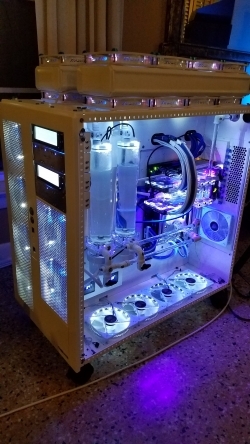 MVIVID said:
I have a question, I've got 2 GTX 980 Ti's SLI'd together, they each of course have and HDMI port. Could I plug the rift into one card, and my TV into the other, using both the HDMI ports? Has anyone tested this.. I'm almost sure you could, but I want to be 100% on this so when I finally get the rift, I'm not then ordering new parts online and waiting even longer.. Thanks in advance for your help.

If you have the GPUs running SLI, then none of the ports on GPU1 will work. If you remove the SLI, then you could probably run the GPUs independently. Please let me know how you got it working because I'm in the same position. I've been running my Oculus off my laptop, but now that my new rig is finally finished being built, I'd like to see how it runs of it. Of course, running the GPUs independently won't provide as much power as running SLI, so figuring out a way to hook the Rift up along with an HDMI monitor/TV would be great to know.

I'm running 2 x Gigabyte 980 Ti Gaming 6GB G1 GPUs running SLI, each one is unlocked and has a custom BIOS flashed, but I recently purchased an LG OLED 4K UHD TV to use as my monitor, replacing 3 x Samsung 4K monitors running Nvidia Surround. The 3 monitors were all running off the DP adapters, but my LG OLED runs off HDMI. Since I'd rather not ditch my OLED monitor, I guess my only options are a DP to HDMI adapter for the LG so I can use the HDMI for the Rift or just keep running the Rift off my laptop, which I'd rather not do having so much time vested into this build. I know with an i7-6950X, my 2 x 980 Tis, and 32GB Corsair Dominator memory, the rift should run much better than my laptop, even though it's running a GTX 1070, which is a step-up from my desktop GPUs.

I am also using an LG OLED UHD TV as a monitor and I run the PC to TV via DP to HDMI without any problems whatsoever.  I did try running DVI to HDMI and had nothing but problems.  Tried 2 completely different brands and they both started creating fail lines across the TV screen.  No such problems with the DP which has been running without a beat for roughly 4 months.

Picture on the LG is stunning.

Well, I ordered 2 different DP to HDMI adapters, which came in today. I guess I'll try them both out tomorrow.

If SLI doesn't work with the Rift, I guess I'm going to have to disable SLI on my 980 Ti's. If I do this, then I should be able to use the HDMI port from each GPU, right? I guess I have a lot of testing to do tomorrow. I've only run the Rift from my laptop so far, so I'm curious to see how it works off my desktop, in terms of quality and responsiveness.