My name is Tanya Leal Soto I’m a Creative
Producer, Storyteller and Content Creator for multiple platforms. I have worked
in Theatre, Film, TV and Art Exhibits for the last 15 years.

I have a fascination for immersive experiential
entertainment, I started working in transmedia because I saw the opportunity to
let the spectator wonder through a fantastic world; as opposed of just telling
a slice of a story like in a book or a movie, the spectator can wonder and
decide what he/she wants to know further, what character to follow, etc.

I’ve experimented with immersive theatre
and web storytelling and it was only natural that I felt attracted to VR.
Currently, and since I have a theater and filmmaking background, I’m
experimenting with 360 video, hoping that I can add interactivity to it.

Another thing that attracted me to VR, is
the potential to play around with my favorite genre: Magic Realism, and its
main characteristic of accepting magic in the rational world.

In this Blog, I will be writing about two
projects:

“Vagabond” - Deals with the main topic of diversity
by exploring a variety of cultural backgrounds thru the magic of dance while
being transported to different spaces.

“Carrousel”
- An exploration of a continuous narrative in 360 where backgrounds and
characters physically change in front of our eyes, reveling the artifice but
allowing for magic.

“ Broad, wholesome, charitable views of men and things can not be acquired by vegetating in one little corner of the earth all one's lifetime.” - Mark Twain

I have been developing this experience together with VR Director Jessica Kantor. This project will explore the cities of the world from the knowledge of the eyes of the locals. Vagabond is the study of diversity throughout neighborhoods of iconic cities. Expressed thru dance and experienced in 3D 360 Virtual Reality.

The First edition of VAGABOND will be an exploration of several neighborhoods in Los Angeles. From its eclectic ethnicities, its creative communities, the wealthy sections, and the hard corners. In the end, the viewer becomes a vagabond, floating through and discovering what gives each neighborhood character.

You put on a headset and find yourself in an empty warehouse.

You could be anywhere in the world.

A group of dancers will approach you, each dancer (or pair) depicting a specific neighborhood of Los Angeles. As the dancers move around the space, you'll naturally choose to watch the dancer that intrigues you the most.

Simply using your gaze, you make an unconscious choice and the entire space will transform into that region of Los Angeles. Projections on the wall will showcase the chosen neighborhood, the music will adjust and the movement will match. Once that moment ends, the dancers will rewind, the camera will lift slowly to reveal a map below where you can choose a new neighborhood to explore.

We are currently looking for funding.

There are some new ideas to flesh out including the use of volumetric capture.

As a first step we would like to have a small team: Director, Producer, D.P., Choreographer and Composer go and scout different Los Angeles’ neighborhoods and work on developing the different sections for this project by really embedding themselves in those communities.

For this project I want to build a
structure that will allow for flat panels to come in and out of said structure to
experiment with moving them as set pieces like in old school theatre where say
buildings, trees, the sky, would appear and disappear on stage as a manner of
transition between scenes.

The challenge of course is that this would happen
not in a stage but in a 360 environment.

The main goal is to follow the actions of
the main characters as they move around the space, backgrounds will change and
different elements appear or disappear.

I have called this project carrousel
because it will all be centered on the image of a vintage carrousel, with
fantastic creatures. The experience will start inside it, as it spins and the
elements start spreading creating the world where the experience will happen.

I have a loose idea of the “story” which
will be full with elements of magic realism but which will have to adapt
depending on the images.

Now, when I said I will build a structure,
at least for the next three months and to have a “working prototype,”  I should mention I am a puppeteer and this
structure will be well, puppet size.

I’ve just acquired a KODAK SP360 4K camera
and will start doing several test with it.

I will design a mock up of the structure
so I can build it and continue testing the camera. As I design the structure
and the images I will start locking the story. 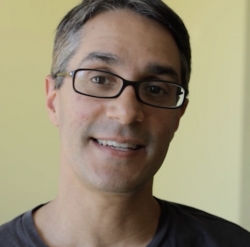 I'm so interested to see how the dancers will evoke the various LA neighborhoods. That's a really great idea.

And I think you're absolutely right that VR is a wonderful medium to do magical realism. The real impact of magical realism is the idea that crazy stuff is happening in the real world, right?  And VR is going to be awesome at making the user feel like they are 100% present in normal reality and then allow you to make magic happen.
1 Kudo
Share
Reply