From Medium to Blender

I'm still fairly new to the Oculus and I'm very much enjoying the whole experience. So for one of my first projects with VR I am trying to make an avatar for VRChat. I'm first creating the model in Medium and then exporting it over to Blender in order to add the necessary joints to it (knee joint, shoulder joint etc). So this model is created purely while using the mirror of course with the model in an arrow stance so I'd assume it'd be perfectly even on both sides. However, when I export this model to Blender and view the individual triangles in Edit Mode it is very much uneven.
I'm not sure if this is just the nature of exporting an OBJ or FBX model to Blender or if there is something that I could do to at least make it a lot more even on both sides. If there is could I have some advice on how I could achieve this or just some advice on exporting in general.
Thanks 🙂
0 Kudos
Share
Reply
4 REPLIES 4

That's a very interesting observation, Akendolfr, thanks for bringing it up. I don't want to say anything conclusive without digging into it, but I could potentially see this being the case. With symmetry in other programs, you are mirroring the vertices exactly 1:1. Medium symmetry works differently. Essentially, it's mirroring the position of the tool applicator and then doing two operations, one for each side, which results in a mirrored version of the SDF data (voxel data, more or less). Then, when you export, it's generating a polygonal mesh from that SDF data. But the exporter doesn't have a knowledge of that symmetry (to my knowledge, I don't know that code intimately), so it is building the mesh looking at the SDF as a whole. In theory, this should result in a perfectly symmetrical final mesh since the SDF data is, but there may be nuance to the system that would cause it not to be symmetrical.

Anyways that's a lot of hullabaloo to basically say "I never thought about that, but it's very possible that export just doesn't obey symmetry." For now, I would just slice it in half in your program of choice and mirror it in there. Thanks for pointing this out!
1 Kudo
Share
Reply

Thanks for the reply 🙂

Another thing I was doing was exporting it with a lower triangle count. I'm thinking it'd probably be better if I just export it as it is an decimate it in Blender instead, hopefully for better results. As long as the model appears fairly symmetrical it's not going to bug me too much.
0 Kudos
Share
Reply

@akendolfr - I export at 100% .fbx with vertex colors then retop and bake in blender. If you want to animate you'll be better off learning to retopo. Decimate won't get you to a deformable mesh. 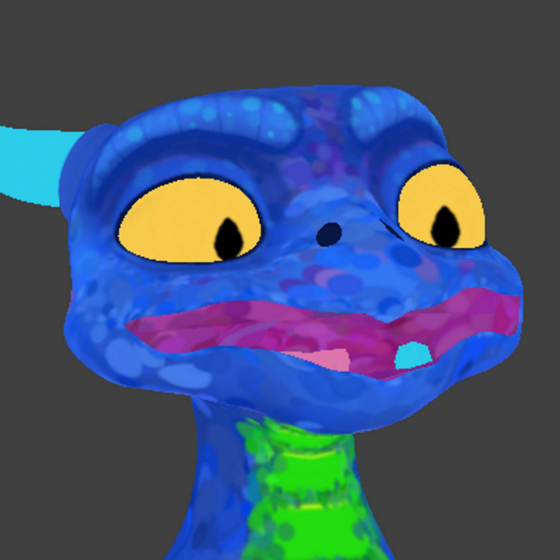 Hi Akendofr, I agree with p3nt4gr4m, even if the model were perfectly mirrored, it wouldn't be ready for VRC avatar creation. First, even if you do the export at a lower triangle count, the lack of proper edge flow (topology) is will produce bad deformations. If you don't know about it, this is a good intro to remaking a high rez model for game/animation: https://youtu.be/2hEHtKH55Us

Also, if you want to mirror the Medium Export in Blender anyways, you can use 'Adaptive Sculpting - Dynamic Topology'. In sculpt mode, there is a 'Symmetrize' option which will do what you want, but it will break your texture.  https://docs.blender.org/manual/en/latest/sculpt_paint/sculpting/adaptive.html