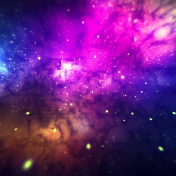 "Posted by IRIS V.R.
Sep 29, 2019 View on Kickstarter
GO GO GO!
With only a couple of days left, I wanted to take some time to do a large update and cover some of the things that aren't explicitly said on the campaign page.
First things first though! We're fairly confident that we'll hit the next Stretch Goal which is the Cyber-Wolf companion character so that's exciting! Really stoked to have this B.A. K-9  working along side you!
As explained in the previous update "The cyber-wolf is a faithful and fully upgradeable companion. Befriend him in the streets of New Kowloon and he'll never leave your side. With a few upgrades (provided by Jade), he'll take commands and become a force to be reckoned with."
FINGER TRACKING
With the Valve Index and Oculus touch controllers comes finger tracking support, which has now been fully implemented. It's not just for looks either! You need your fingers to select things on menus, you can push NPCs around and even just listen to the creak of leather as you clench your fists.
https://www.youtube.com/watch?v=2J9QE_ZpBH0 ;
If you have Vive wands, you don't have to worry. We've got you covered as well! We've built a system that will automatically detect and pose your hands to the appropriate gesture when needed.
HOLODECK DESIGN PHILOSOPHY
I wanted to take a moment to go over some of the basics about LOW-FI design and what makes it more like a holodeck program than a typical game. This isn't a marketing buzz thing, but a very real philosophy that I've put a lot of time into thinking about.
After 6 years of working and playing in VR and 34 years of thinking about Star Trek's holodecks, I've decided that what I (and I'm sure many others) were expecting from VR was in-fact more like a holodeck program than a face mounted game system. But what does this mean?
For me it means a few things. The first, is that a holodeck program shouldn't punish or frustrate the player. I never once imagined someone walking out of a holodeck and flipping a table, throwing a controller, or running to the wall-console and looking for a walk-through. Don't get me wrong, there's nothing wrong with puzzle games, fast action and eye co-ordination or gunplay, BUT, and this is a big one, none of these should lead to frustration in VR and should be left as optional.
I'm convinced that once someone takes off a headset in frustration, that they are very unlikely to return to that experience.
I want to empower the user.
This means different things to different people. For some, they want to feel like a bad-ass gunslinger (we will enable this if that's what they choose), for others, the want to feel like they can outsmart a brilliant, criminal-mastermind (I want to make enemies worthy of your wit). And yet others, want nothing more than to sit by a rainy window, listening to their tunes and look out over a vast cyberpunk dystopia or walk into an arcade and play have a bit of fun.
A holodeck program should allow all of this to happen. We want you to get what you want out of LOW-FI world. Again, this includes puzzles, action and all the rest, but as options, not what we call in the industry "the main gameplay loop". LOW-FI has no "gameplay loop". It is a place to experience, with things to do. A place for you to live out your cyberpunk fantasies. The VR we were promised. The VR we deserve.
OCULUS LINK
On a more pragmatic note, there's been some exciting news for Oculus Quest users this week, Oculus announced Oculus Link, which will allow Quest users to connect a USB-C table to a VR capable PC and play high-end content like LOW-FI!
This also means we hit our $600k stretch goal!!! Yay!
I joke. But it is a great stop gap solution for those with a Quest. Find out more here!"
Update #9: The final stretch! https://www.kickstarter.com/projects/irisproductions/low-fi/posts/2637330 ;
You can
pledge at this link below
LOW-FI, via @Kickstarter https://www.kickstarter.com/projects/irisproductions/low-fi
Thank You for your time and I hope to see you in the metaverse
Oculus Quest Status: RECEIVED Tues, May 21 2019 12:01 PM GMT UPDATE: FAULTY, ISSUED REPLACEMENT Fri, July 26 2019 Oculus Rift & Touch Bundle Status: RECEIVED Thurs, Sept 07 2017 2:38 PM GMT Oculus Rift DK2
1 Kudo
Share
Reply
0 REPLIES 0